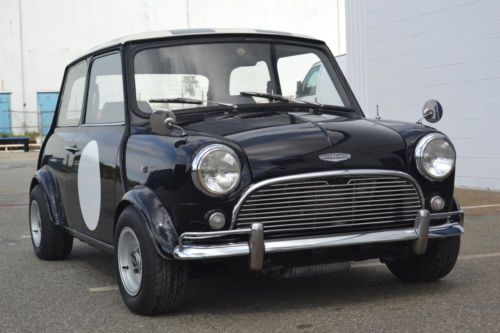 Mini's Superleggera Vision Concept may not be a Paris Motor Show debut, but this is the first time we've seen this stunning all-electric roadster in the metal, having been first shown on the tony shores of Lake Como at Villa D'Este in May. While it's small in stature, it's still big on both presence and detail, from its overall stubby yet sleek proportions to its Union Jack taillamps, Jaguar-esque rear fin and elegant rearview mirrors.
We still don't know much more about what powers this Touring Superleggera coachbuilt showcar, as any powertrain specifics are conspicuous by their absence, but we'd welcome both a pure electric version and something powered by the BMW/Mini turbocharged three-cylinder currently making the rounds in the new Mini Cooper.
Last we heard in September, any decisions on a production future for the Superleggera Vision have been tabled, with word being that a further six months of study is planned before Mini decides to greenlight or nix the project. We'd love to tell you that the fact that it's here in Paris is a great sign, but we wouldn't believe us, either.