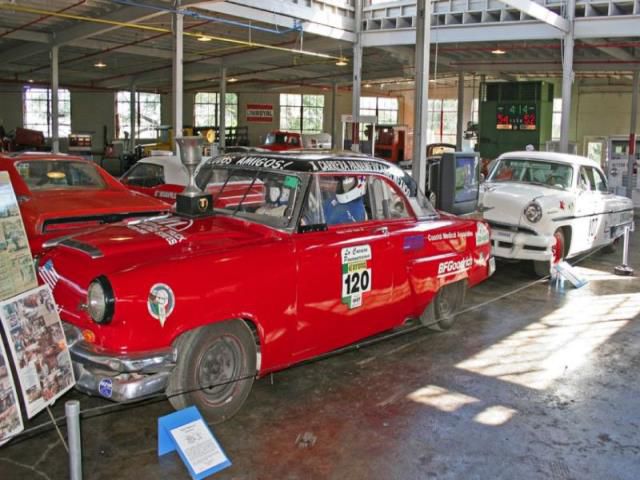 1954 Mercury Monterey Race Car - Authentic La Carrera Pan Americana Winner 1st Overall 1992 La Carrera Panamericana Mexico FIA historic marathon rally with drivers Dr. Peter Frank and Mark Williams. This 1954 Mercury Monterey has a very interesting history. As the story goes, Dr. Peter Frank was infatuated with the legendary race since visiting Mexico as a child on a family vacation. With his interest in vehicles and speed he decided to take this race on when it was revived by Loyal Truesdale and Eduardo Leon in 1985. This Mercury was located in 1989 and was taken to the same shop that had built the 1988 race-winning car for the La Carrera. Dr. Frank explained, “you need a battle-ax. You want to be sure your brakes, suspension and steering are top-notch. You want a strong engine. But since it’s a 2,000 mile race, you want to tend towards reliability rather than horsepower. The Mercury is a leaner, meaner Lincoln, slightly smaller, but you could still get that big engine in there.” It was built on a platform that included a 351-cid V-8 engine, automatic transmission, complete NASCAR-style brakes, upgraded suspension, full roll cage with a red and black exterior finish, along with the associated graphics from running, and winning the modern La Carrera Panamericana.
FEEL FREE TO CONTACT ME AT ANY TIME WITH QUESTIONS : vaodqbalanialvin@churchsociety.net