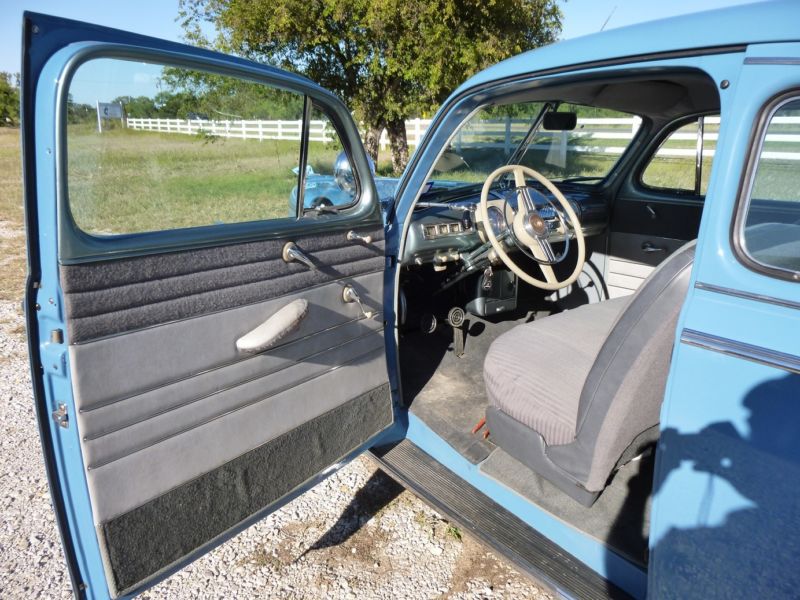 For more pictures email at: odisokkoos@oxfordfans.com .

This is a very special 1946 Mercury 8 2dr Coupe. Although there is no documentation that can be obtained to prove
the claim, I am aware that I am the first civilian registered owner of this Mercury. During the frame off
restoration, a had a happenstance meeting with a gentleman who overheard me talking about the car while out at
lunch one day. He explained to me that he knew my car, I obviously thought that he knew of the 46 coupe, but not my
specific car. He went on to explain to me every large dent that was in the car and how it got there. This perked up
my ears, but still didn't make me completely believe the guy. But, once he was able to accurately describe what was
wrong with the engine, which was the #7 valve being burnt, and why it had been put in storage, I suddenly believed
everything the man said. So what makes this car so extra special? It spent its original life as a pursuit vehicle
for the Texas Rangers chasing down bootleggers between San Antonio and Abilene. Every dent that was in it came from
physically running another car off the road. He knew this information because he was a retired Texas Ranger. ( I
suspect he drove the car )
During the restoration an original style Mercury V8 24 stud Flathead installed after complete rebuild. Was bored
.125 over, aluminum Edlebrock heads, mild cam, and a few other improvements were made. All new interior made from
same type of fabric used when new. Original AM radio installed and in working condition. Original heater completely
rebuilt. Dash clock is a bran new clock from original 40's stock. Original chrome and stainless parts were
reinstalled after being re-proccessed. All new drivegear and suspension. I built this car up to be a driver and as
original as possible. I did not want it to just sit around looking good, even though it does do that very well.
When you purchase this beautiful Merc, a spare engine that needs rebuilt will accompany it as well as a bran new
Mitchell overdrive system.