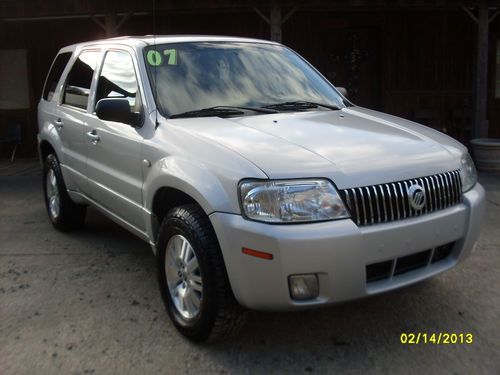 I HAVE A SUPER NICE MERCURY MARINER PREIMER THAT IS LOADED. THIS SUV HAS NEW TIRES AND IS READY TO BE DRIVEN IN ANY KINDOF WEATHER. IT'S VERY COMFORTABLE WITH THE ROOMY INTERIOR, HEATED SEATS, 6 DISC CD CHANGER, AND ALL POWER OPTIONS SEATS WINDOWS ECT. EVERYTHING WORKS AS IT SHOULD. THIS SUV IS AWD WITH 4 WHEEL DISC BRAKES. I OWN A USED CAR LOT AND MY WIFE HAS DROVE THIS CAR FOR OVER THE LAST YEAR BUT SHE GOT A NEW 2012 MAXIMA AND I SELL CHEAPER CARS THAN THIS ON MY LOT. BUYERS WILL RECEIVE A 60 DAY TEP TAG WITH PROFF OF INSURANCE. KY BUYERS MUST PAY SALES TAX. ALL CARS ARE SOLD AS IS. IF THE CAR IS NOT AS DESCRIBED I WILL REFUND THE DEPOSIT. THIS IS A VERY NICE SUV BUT IT HAS A FEW SCRATCHES AND PAINT CHIPS PLEASE SEE PICTURES AND THE AIR BAG LIGHT IS ON.  IF YOU HAVE ANY QUESTIONS PLEASE ASK! THANKS FOR LOOKING AND HAPPY BIDDING. JEFF