One Family Owner Since New on 2040-cars 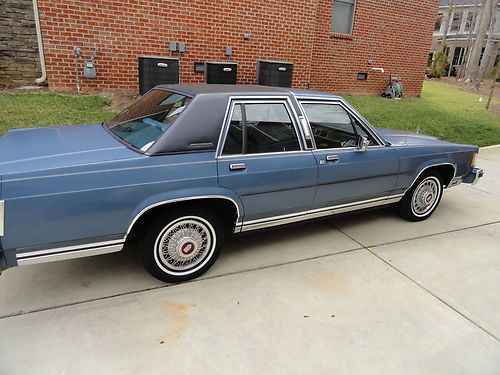 Condition: Used: A vehicle is considered used if it has been registered and issued a title. Used vehicles have had at least one previous owner. The condition of the exterior, interior and engine can vary depending on the vehicle's history. See the seller's listing for full details and description of any imperfections. ...
This Grand Marquis was owned by my Dad he gave it to me three years ago. Dad purchased this vehicle new in December of 1986 from Sentry lincoln/Mercury in Medford, MA and it has never seen sand or salt roads. This vehicle has 108K original miles. The vehicles has no rust, nor has it ever been in an accident. The car is extremely clean inside and out, including the underside, but the paint has faded with age. In the last two years since I have own the car I have done many mechanical updates. New tires, shocks, exhaust, battery , AC compressor,  and heater core, rear brakes, rear drums and wheel cylinders ,master cylinder. In November of 2012 I replaced the water pump and while everything was apart I replaced the timing change cover, power steering pump, alternator, clutch fan, radiator, all hoses and belts, thermostat  and anti freeze, new spark plugs, distributor cap and rotor. Also at the same time replaced front brakes, rotors and wheel bearings. This car is mechanically sound and needs nothing. Starts and drives very well. Steering and suspension are solid.
Options: Equipped with 5.0 liter fuel injected engine with over drive transmission, power windows and door locks, power side mirrors, power driver and passenger front seats, reclining front seats, rear window defroster, climate control, date/time clock, cruise control, AM/FM cassette radio, tilt steering wheel, corning lights, power truck release, power antenna, although this is currently not working. I do have the part to repair it. Spare tire new was purchased when tires were replaced and has never been used. Vehicle is also been a smoke free vehicle.
The negatives. Small impact dent on driver side rear door from a basketball hit it does not show well in the pictures it is near the top where the pin stripe is. Small dent in roof near the top of rear window, this was done by a transport company when my Dad would ship the car to Florida. Passenger front door needs new power door lock actuator.  Rear passenger  door window motor runs but the window does not go up or down.
Everything else works perfectly including the clock which also provides the date. We have a service journal on the car since the day it was purchased with everything that was ever done with dates and mileage recorded, oil changed religiously at 3 thousand miles or less since new.
The vehicle is purchased as is where is and it is the responsibility of the buyer to ship the vehicle if that is your preference. Bank transfer prior to pick up or cash at time of pick up is acceptable.
Thanks for looking .