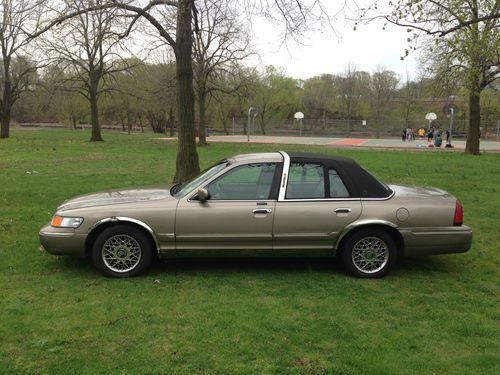 CLEAN LEATHER INTERIOR , PRETTY CLEAN EXTERIOR - SOME MINOR DENTS AND SCRATCHES - CHECK PHOTOS - NOTHING MAJOR.
RADIO WORKS GREAT , LIGHTS ( DISPLAY) ON IT DOESN'T WORK.
FULLY LOADED :
POWER WINDOWS , POWER LOCKS, KEY LESS ENTRY , WOOD TRIM.
2 TONE LEATHER SEATS , CRUISE CONTROL , POWER DRIVERS SEAT , BRAND NEW ALTERNATOR,CAR RUNS AND DRIVES VERY GOOD.
ENGINE STRONG AND SMOOTH , TRANSMISSION SHIFTS FLAWLESSLY .
NEW JERSEY INSPECTION TILL 07\2013.
CAR COMES WITH 30 DAYS \ 1000 MILES POWER TRAIN WARRANTY.
PLEASE BID ONLY IF YOU ARE READY AND ABLE TO BUY , PLEASE DON'T WAIST MY TIME WITH STORIES AND GAMES.
FEEL FREE TO CHECK THE CAR BEFORE YOU BUY , NOT AFTER.
BID WITH CONFIDENCE - YOU WONT REGRET , THIS IS A TON OF CAR FOR THE MONEY.
NO RESERVE , YOU BID = YOU WIN.
THIS IS A LOT OF CAR FOR THE MONEY
ANY QUESTIONS - 7325432512 NEIL