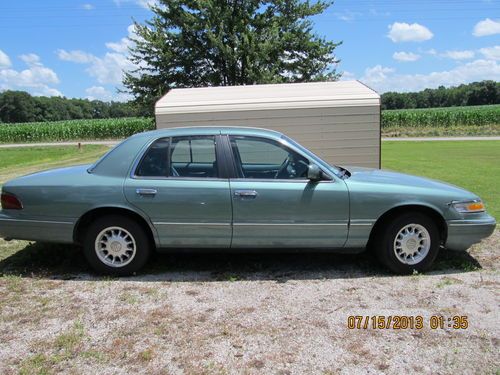 Condition: UsedA vehicle is considered used if it has been registered and issued a title. Used vehicles have had at least one previous owner. The condition of the exterior, interior and engine can vary depending on the vehicle's history. See the seller's listing for full details and description of any imperfections.Seller Notes:"The 1997 Mercury Grand Marquis has new tires, Shocks, Battery, Complete tune completed at 103,000 miles."

The 1997 Mercury Grand Marquis LS Sedan is in very good condition for model year with low miles.  I purchased the car2 years ago, and have driven for long trips. The vehicle  has newer tires, battery, shocks, and has the  100, 00 mile engine tune up  completed whihc included new spark wires, plugs, engine coolant flush, transmission filter flush with the filter changed.  The vehicle drives nicely and gets around 20 MPG for on high way driving.  Myself and previous owners were not smokers and the interior is in good shape