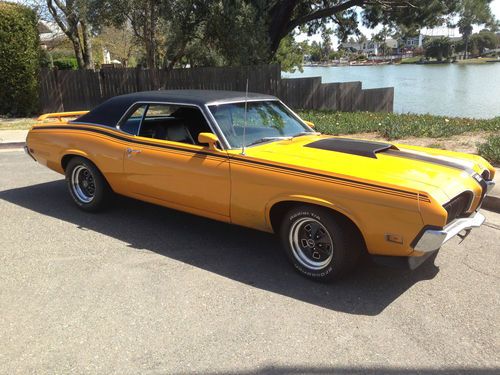 This is 1 of 146 BOSS 302 Cougar Eliminators produced in 1970. All in All A rare find. This eliminator has the race pack with the wide ratio transmission,  8k Tach,  the deluxe interior package,  traction loc differential with 3.50 gears,  console,  tilt steering wheel,  tinted glass,  decor group,  am/ 8 track (missing),  and has a service replacement block  that was replaced at the dealer in 1971. The motor also has the correct date code carburator # DOZF-9510-ZA.  The original and rare "REV LIMITER"  that came with the car is also available just not installed.  The car also has a unique dealer installed vinyl top from Canoga Park Lincoln Mercury back in 1970.  We also were amazed to find all three build sheets under the carpet. That never happens. See the sheets in the photos.
This car is original !!!  It has the original  patina paint and  Original interior, minor dings,  and buffing burns from over the years. Still has the rare plastic wind deflectors in the nose under the hood!  As stated earlier,  a very cool,  very rare ELIMINATOR SURVIVOR!!!
The original owner worked for Lincoln Mercury as a mechanic. He owned the car for 36 years. The car was then sold to a cougar collector in 2006 with 5 other cars and parts. This car is a true survivor and should not be restored.  Its only original once.
The best part  about this car is you can get in and drive this Eliminator down the freeway and cruise !!!
A  $2,000.00 non refundable deposite is required within 24 hours at the end of the auction. We also reserve the right to end auction at anytime. Winning bidder is required to pay full amount of bid within 7 days of end of auction. Winning bidder is responsable for the purchase of the car.
On Mar-26-13 at 22:58:45 PDT, seller added the following information:

I also have a MARTI report for the car.