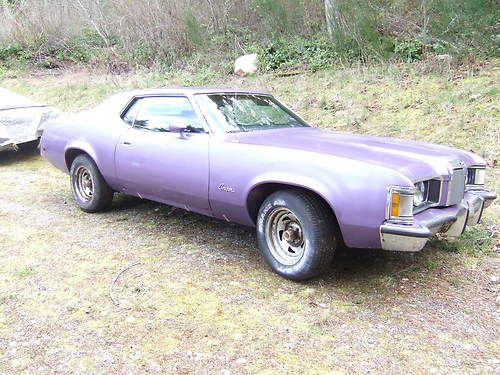 1973 Cougar XR-7 musclecar project. Does not run needs a radiator, starter and distibutor. The passenger side rear floorpan needs to be replaced. Body is very solid. Origanally had a stock hood scoop. The interior is in good condition the front seats need to be recovered. Deluxe rimblow steering wheel, tach dash. Power steering, power disk brakes, 9 in rear, staggered shocks. Engine in it is a 351 2v originally a 4v car (Q code 351 Cobrajet). Turns over by hand. C6 auto transmission Extremely easy project, very solid won't take much to put it back on the road. Car was originally white. Don't miss out starting bid is for what the engine and transmission are worth! Delivery to Seattle WA area possible all other areas winning bidder must arrange shipment. Good luck and be sure to check my other car out for sale!