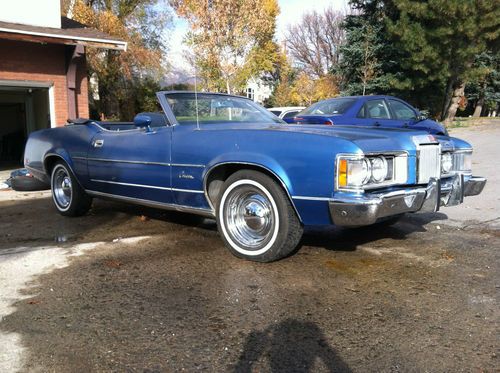 Condition: Used: A vehicle is considered used if it has been registered and issued a title. Used vehicles have had at least one previous owner. The condition of the exterior, interior and engine can vary depending on the vehicle's history. See the seller's listing for full details and description of any imperfections. ...
This is a collector's special - RARE 1973 XR7 Mercury Cougar convertible. This vehicle is virtually rust-free. This car was purchased from the original owners in 1991 with just over 50k miles on it. It was originally purchased and lived its first 18 years in Nevada, before being brought up here to Salt Lake. It has been garaged for the past 22 years, driven very little. The vehicle was in good running condition five years ago when it was parked, but has not been driven in a while and will probably require a good tune-up.
Soft top is white, but will probably need to be replaced
Was running smooth and strong, but has simply been parked for too long. I am not a mechanic, and would prefer to see this great car go to someone who knows what to do with it to make it what it needs to be.
Clean, clear title in hand. Email with questions, or to set up a time to come take a look and I will do my best to respond as soon as possible.
On Jun-24-13 at 09:25:48 PDT, seller added the following information:
This cougar has the sought-after 351 Cleveland motor
High book value: $31,320
Average book value: $18,960
Low book value: $10,440
http://www.nadaguides.com/Classic-Cars/1973/Mercury/Cougar/XR7-2-Door-Convertible/Values