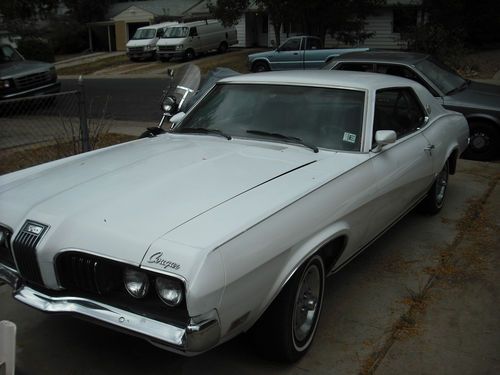 Condition: UsedA vehicle is considered used if it has been registered and issued a title. Used vehicles have had at least one previous owner. The condition of the exterior, interior and engine can vary depending on the vehicle's history. See the seller's listing for full details and description of any imperfections.Seller Notes:"This car was previously owned by a member of the local Cougar club, the front Emblem is missing the interior is in great condtion small amount of wear on driver's side"

This is a TRUE AUCTION no reserve.  This car only has 77K original miles, the car is all original, original hub caps, radio (still works), clock.  A 351 Cleveland high performance engine (original) New 4 barrel Edelbrook Carb, runs amazingly strong.  Rare to find a XR-7 all original like this one, a true survivor.  Door panels are perfect

Only 3,704 of these had a 351 Cleveland engine, the most sort after engine lf the Cougars.