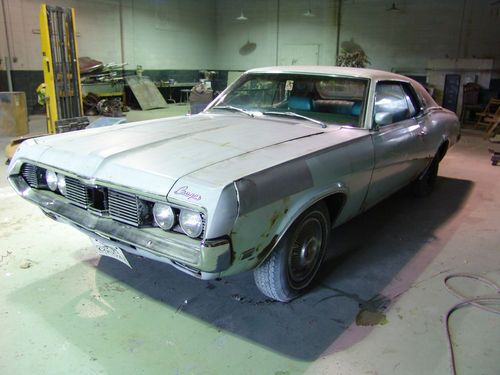 Up for auction is a 1969 Mercury Cougar XR7.  This car will be a great restoration project or parts car.  This is a complete car but is rusty.  I have not done a close inspection but I have seen rust in the quarters, doors, floors, shock tower tops, torque boxes.  Frame rails seem to be solid.  This Cougar was a daily driver until 2009 when it was parked.  It will run if you keep a supply of fuel to the carburetor but will not pump from the tank.  There is a brake leak somewhere and a water hose leak.  Engine and transmission appear to be in good working order.  I purchased this car as an investment to resell and is listed at a fair price.  The 2bbl carburetor and intake was replaced with a 4bbl Carter AFB Carburetor.  Wheels are Ford Steel with hubcaps (3, missing one).  The previous owner drove it from 1994 until 2004, then occasionally started/moved it until 2009.  I am willing to deliver the car up to 300 miles from my home at $1.00 per mile ROUND TRIP.  Rate to be calculated before delivery via Google Maps.  I would prefer local pickup in Jeffersonville, IN.  Please ask questions before you bid or give me a call at 502-445-3993 to discuss the car.  VIN and Door Tag information is below.  Happy bidding - Jeff