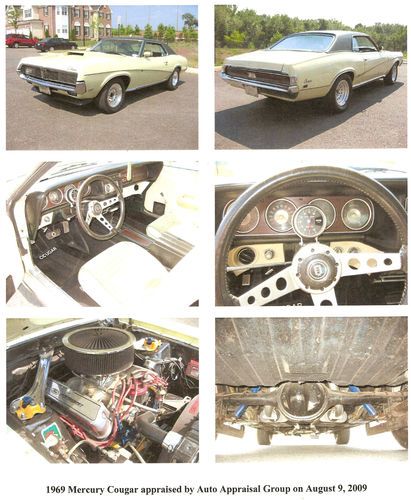 Condition: Used: A vehicle is considered used if it has been registered and issued a title. Used vehicles have had at least one previous owner. The condition of the exterior, interior and engine can vary depending on the vehicle's history. See the seller's listing for full details and description of any imperfections. ...
Always garaged, this classic muscle car looks, runs great and includes many extras.
For sale is this 1969 Mercury Cougar, 2-Door Hardtop.  Light Ivy Yellow color with a Dark green top.  The odometer reads 42923 miles.
The 3 things my Father loved most were his family, working on his classic cars and Nascar racing.  His life hobby was rebuilding cars/engines, not only for himself but also to help others when needed.
The engine has been completely rebuilt in 2001 with many upgrades.  As we said, this was my Father's hobby.
The Exterior displays a front spoiler, hood scoop, vinyl top, aftermarket alloy wheels and repaint.  The interior shows normal wear, with the upholstery, carpet and dash pad replaced.
This upgrades include:  Tachometer, gauges, Holley 4-barrel carburetor, MSD ignition, headers, Detroit Locker rear-end and traction bars.