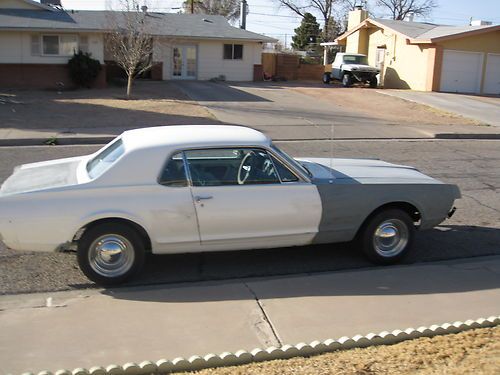 !967 Mercury Cougar, restoration in progress. I bought this car three years ago on ebay. It is originally from California. It sat in a backyard for five years before I bought it. The previous owner could not verify the accuracy of the mileage. Much work has been done to it. Needs body work completed. Engine and transmission have been rebuilt with less than 1000 miles on them. New tranny cooler. Exhaust system is new from the plasma coated Hooker Headers, through the Flow Master mufflers, to the tailpipe tips. Front suspension has been completely rebuilt, including new wheel bearings and brake cylinders. New tires, rims and hubcaps. Windshield replaced. Dash board and console refurbished. Seats reupolstered. Radio speakers replaced. Digitial sequential turn signal processor, replaced the old analog system. There are many other new or rebuilt parts on the engine, including, starter, alternator, fuel pump, etc. This Cougar has a lot of potential for the right person who will finish what I have started. A five hundred dollar deposit in PayPal will be required within 48 hours of the end of the sale. The balance will be required within seven days. The car will not be shipped until the final payment is completed.