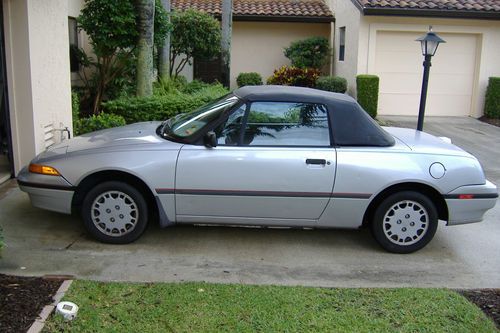 Here I have a 1993 Mercury Capri Convertible Automatic with Ice Cold A/C with 121,000 original miles that still gets 30 mpg. I have been driving this car for the past several weeks for my marketing position which requires me to put a minimum of 1000 miles a week on this vehicle. It is very dependable, power windows work fine, pop up headlights work fine, a/c and radio also work fine. My problem is that the car is too small to carry my marketing supplies. It has dings and a dent on the front passenger fender and also on the front upper valance, its paint isnt that great, its interior is okay- dash has no cracks and seats are decent with only a couple of tears. All in all not bad for the value. Recent oil change, new drive belts and new battery. Has a bit of a rough idle at times because engine will occasionally idle at 500 rpms- should be at 700 rpms. All you have to do is put your foot on the gas pedal just a bit to raise the rpms.. If interested please contact Robert at 352-601-2272