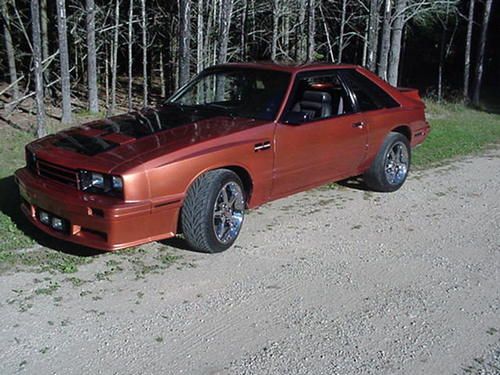 Condition: UsedA vehicle is considered used if it has been registered and issued a title. Used vehicles have had at least one previous owner. The condition of the exterior, interior and engine can vary depending on the vehicle's history. See the seller's listing for full details and description of any imperfections.Seller Notes:"THE ONLY BAD ON THE CAR IS THERES A SMALL OIL LEAK WHEN THE CAR SITS NOT SURE IF ITS THE OIL PAN OR REAR MAIN SEAL. THE MPH IS OFF BY 10 AND THE ORIGNAL TACH ONLY WORKS WHEN THE ENGINE IS UNDER LOAD. I WAS TOLD ITS BECAUSE OF THE MSD INGINTION BOX. ALSO MISSING THE BACK TRIM PEICES FOR THE SIDE MARKER LIGHTS."

THIS CAR IS A REAL "RS" 5.0 CAR WITH 5 SPEED!!!..THIS CAR WAS ORIGNALLY FROM ARIZONA SO THIS CAR IS VERY SOLID NO RUST! IT HAS A NEW PAINT JOB DONE THIS YEAR. THE INTERIOR WAS REDONE LAST YEAR.THE GUY I BOUGHT IT FROM SAID THE ENGINE WAS REBUILT WITH LESS THAN 15K ON IT BUT I HAVE NO PROOF OF THAT I AM JUST GOING BY WHAT HE SAID BUT IT DOES RUN REALLY NICE AND THE MOTOR IS ALL PAINT UP. I DID TAKE THE VALVE COVERS OFF AND ITS REAL CLEAN WITH ROLLER CRANE CAM ROCKERS, THE ENGINE HAS VICTOR JR INTAKE, HOLLY 650 OR 700 DOUBLE PUMPER. HAS AN MSD IGNITION WITH REV LIMITER SET AT 5000 OR 6000 CHIP. DOES HAVE AN AFTER MARKET HOLLY FUEL PUMP WITH REGULATOR.HAS FULL LONG TUBE HEADERS WITH TRUE DUALS WITH "H" PIPE AND FLOWMASTERS. HAS NEW SHOCKS IN FRONT. THE CAR HAS REAL COBRA "R" RIMS. THE LOOVERS ON THE BACK WINDOW ARE REAL METAL ONES NOT PLASTIC! THE TIRES IN THE FRONT ARE ALMOST NEW THE REAR ARE MICKEY THOMPSON STREET RADIAL DRAGS THEY WERE USED WHEN I BOUGHT THEM SO YOUR GOING TO NEED NEW ONES. THE CAR HAS A/C BUT THE PUMP WAS TAKEN OFF BEFORE I BOUGHT IT. I BELEAVE THE REAR END IS 3.73 WITH LIMITED SLIP. THE CAR RUNS AND DRIVES GREAT AND DOES GETS UP AND GO!PLEASE EMAIL ME WITH ANY QUESTIONS AND I WILL DIRECT THEM TO MY SON AS THIS IS HIS CAR.THANKS