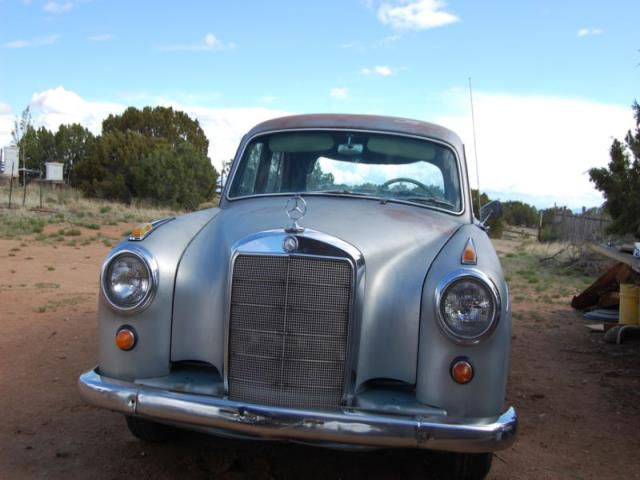 Normal 0 false false false EN-US X-NONE X-NONE 1959 Mercedes 220-S Colorado car. Purchased from the 2nd owner It could be restored or parted out. Tons of parts. Would be an awesome vehicle if fixed up. Car starts and has decent brakes but would need to be transported or towed for safety since it hasn’t been a daily driver since 2007 Here are the facts on this rare beauty- though I have owned it only a month. Clear transferable title. Door coverings, ceiling fabric, rubber seals and gaskets and upholstery are sun damaged or old. Most glass is good except the windshield has a ping in the center of it. Engine: compression test shows over 100 lbs in most cylinders. Car has plenty of power for a 2200 cc. engine. I shut it down soon after testing the drive train. The engine sounded great. Ignition: Last tune up was in 2003 according to receipts, but it starts after a few attempts. Fuel: there is an electric fuel pump. The twin carburetors were rebuilt in 2000, need service, and contribute to engine stalling out. Drive train: I drove the car from one shop to another ok, Shifts ok. Body: see photos. There is a small hole in the rear door well, a hole in the drivers side floor, small rusted area in each front wheel well. These are sheet metal areas and not structural. The underside of the car was undercoated at some time with a rubberized spray and that saved the car from deep deterioration. Spare tire well rusted in small sections. Structurally the car is solid, Needs new paint. The frame, rails, doors, truck lid and hood etc.etc. are all solid! Has 2 good tires and 2 poor tires. Spare parts: misc spare parts ie. rear bumper over riders, reverse lights, interior door parts, trunk matting, replacement door latches and vent window latch along with misc. parts. Original Bilstein jack,