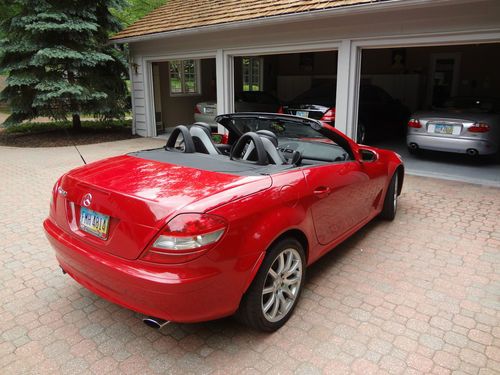 I purchased this car for my wife's 60th birthday.  It has never seen any weather except those long sunny summer days in Ohio.  It has been excellently maintained and stored in a heat garage.

A world-class combination of luxury and performance, this lavishly-appointed and sport-tuned SLK350 is a sterling example of the latest iteration of the original power hardtop roadster! Showcasing Comfort/Entertainment/Heating Packages,  you won't find a nicer or more attractive SLK on the market, especially with this LOW mileage!

Big power comes from a powerful 3.5l V6 under the hood churning out 268hp for incredibly brisk acceleration off the line with ample power in reserve to pass slower traffic at speed. Paired with a 7-speed automatic with sport and comfort modes, this SLK is a breeze to drive and features TouchShift for a more engaging driving experience when desired. Nimble and lithe handling makes this Mercedes a blast to drive while still returning an efficient 25MPG highway. Ready to let the sun shine in? So is this SLK! The sleek hardtop disappears in seconds with the mere touch of a button and still offers enough cargo space for a quick roadtrip.