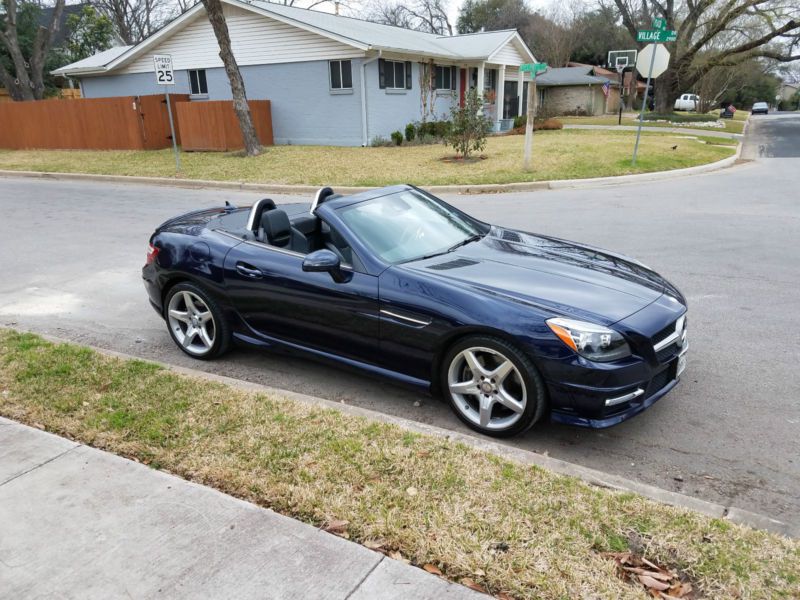 I am always available by mail at: lavelleopoien@juno.com .

Garage kept dream sports car with low mileage. I special ordered from Germany with manual transmission and fully
loaded with all the packages. It's really fun to drive! My wife and I are starting a family so this car doesn't fit
into the mix right now, but I'd buy this car again. Paid $55,000 plus tax at dealer.
I added the Magic Sky Control Panorama Roof: $2,500
With the touch of a button, the sunroof changes from light to dark to allow sunlight in or not. Having a glass
sunroof in a convertible is very rare and helps make the interior feel larger with the top up.
The metalic blue exterior and black interior looks really sharp. The interior lights up at night with subtle red
lines that make it feel sporty and classy.
As you'll see in the carfax report, I was in an accident in this car about 1.5 years ago. I was stopped when
another driver drove into the passenger side side panel when leaving a parking lot. The door panel and rear panel
were dented and were replaced with original brand new parts and paint.
Premium package, $2,590
iPod/mp3 media interface cable, Airscarf - ventilated headrest, Sirius Satellite radio, harmon/kardon sound system
with dolby 5.1, heated front seats, IR remote roof) black MB-Tex interior
Lunar Blue Metallic paint: $720
Lighting Package: $1,390
Bi-Xenon headlamps, intelligent high beam control
Multimedia Package: $2,330
7.0" color display, DVD Coding, Power folding mirrors, COMMAND with navigation and voice control
Sport Package: $2,500
18-inch AMG 5-spoke alluminum alloy wheels, AMG sportline
Rear deck spolier: $350
AIRGUIDE windstop ($350), digital dual zone climate control ($760), black ash wood trim ($325)
Always garaged, Fully loaded with all the goodies, Looks & drives great, Must see, Never seen snow, Non-smoker, One
owner, Seats like new, Very clean interior