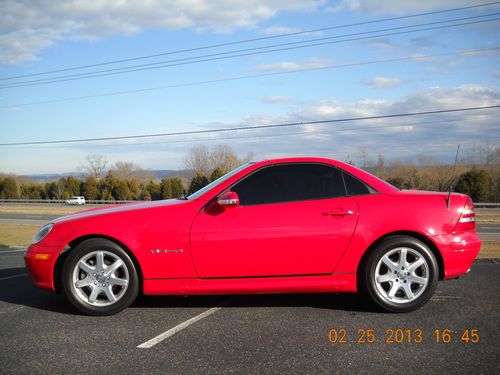 I PURCHASED THIS CAR USED FROM A DEALERSHIP WITH 8,245 ORIGINAL MILES ON IT.  IT IS THE ULTIMATE SPORTS CAR FOR TWO, HOWEVER IT IS EXTREMELY DIFFICULT TO HAUL MORE THAN ONE GRANDCHILD AT A TIME IN IT!  I HAVE BABIED THIS CAR LIKE A NEW BORN, AS IT WAS THE CAR OF MY TEENAGE DREAMS...AND IT TOOK A LONG TIME TO MAKE THAT DREAM COME TRUE!

THE CAR IS IN EXQUESITE CONDITION...WHILE IN MY POSSESSION THE CAR HAS NEVER BEEN RAINED ON, OR DRIVEN IN THE RAIN!  I'M JUST A LITTLE OBSESSED ABOUT IT...JUST A BIT!  IF YOU HAVE ANY QUESTIONS WHATSOEVER, PLEASE EMAIL ME.  LEAVE A NUMBER IF YOU WOULD LIKE TO SPEAK WITH ME ABOUT THE CAR.

BID WITH CONFIDENCE, AS THE WINNING BIDDER WILL NOT BE DISAPPOINTED!  BUYER RESPONSIBLE FOR TAXES, REGISTRATION, SHIPPING SET UP, AND ANY SHIPPING CHARGES INCURRED.  A DEPOSIT OF $500.00 IS REQUIRED WITHIN 24 HOURS UPON WINNING BID. BALANCE TO BE PAID IN FULL IN 5 WORKING DAYS.  CAR IS LOCATED IN MASCOT, TENNESSEE, WHICH IS 8 MILES, EAST OF KNOXVILLE.  I WILL BE HAPPY TO PICK YOU UP AT THE KNOXVILLE/MCGEE TYSON AIRPORT.