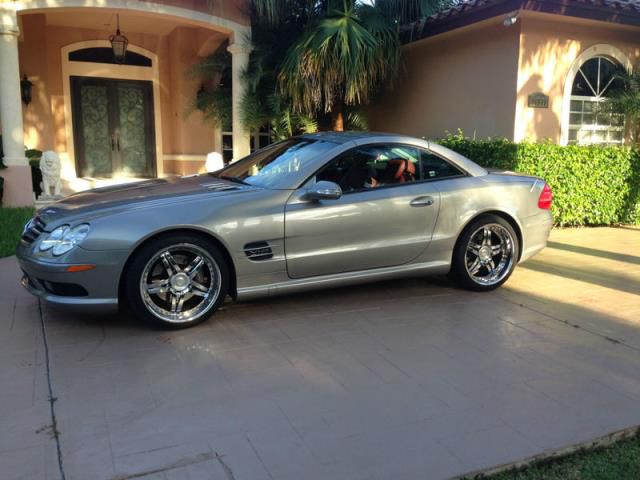 For sale is a great looking 2003 Mercedes Benz 500SL/ The car has always been under warranty, either factory or supplemental after factory warranty. It is still covered under the Warranty Direct XtraCare Plus 25/25 Expiring 11/30/2013. This would give the buyer plenty of guarantee and confidence when purchasing the vehicle. The car only has 50,000 miles thus means it has been driven 5,000 miles per year. This car has been driven less than most collectibles or show cars.

The exterior is a classy champagne color and the interior the contrasting red. It is definitely an eye-catcher. The car has the AMG style body flares as you can see by the front spoiler and has an updated grill that matches (champagne) the color of the car, rather than the original that came with the car (it is MB OEM).

The 3-piece Avus wheels are chrome and beautiful. The wheels are 19's with the rear deep set and the tires have most of their life left. .Has just had service done and the car has never been in an accident, incident or fender bender.

The car, while a 500 has the badge of 600 on the back as well as the side grills. Also has a Renntech badge. Buyer can leave or remove as the badges can be removed without affecting the car nor the paint.

The A/C is incredibly cold and the seats also have the A/C or Heat blown through which was an option as well as the massage feature which it has. the dash is perfect, no cracks and has the black wood option for the interior trim. The vehicle has all the options offered in 2003 minus the glass roof.
Please email if there are any questions.