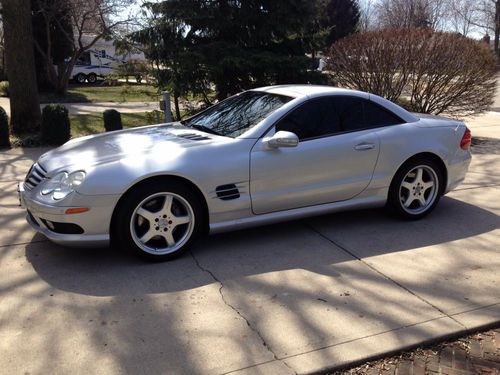 BEAUTIFUL 2003 MERCEDES SL500 SPORT IT HAS GREAT OPTIONS! 62,000 MILES, DISTRONIC CRUISE, NAVIGATION, INTEGRATED PHONE, HEATED/COOLED SEATS, XENON HEADLIGHTS, NEW TIRES WITH ONLY 600 MILES ON THEM. JUST SERVICED WITH NEW BATTERY AND MOBIL OIL CHANGE .BRAKES ARE AT 60% PER INSPECTION. NO ISSUES EVERYTHING WORKS AS IT SHOULD. THE MERCEDES IS AVAILABLE FOR INSPECTION ANYTIME. CLEAN CARFAX, BOOKS, 2 OWNERS AND SERVICED AT DEALER REGULARLY. NO DAMAGE, NON SMOKER, NO CURB RASH ON WHEELS, ONLY REASON FOR SALE IS LOOKING TO GET A 4 DOOR JEEP WRANGLER UNLIMITED.