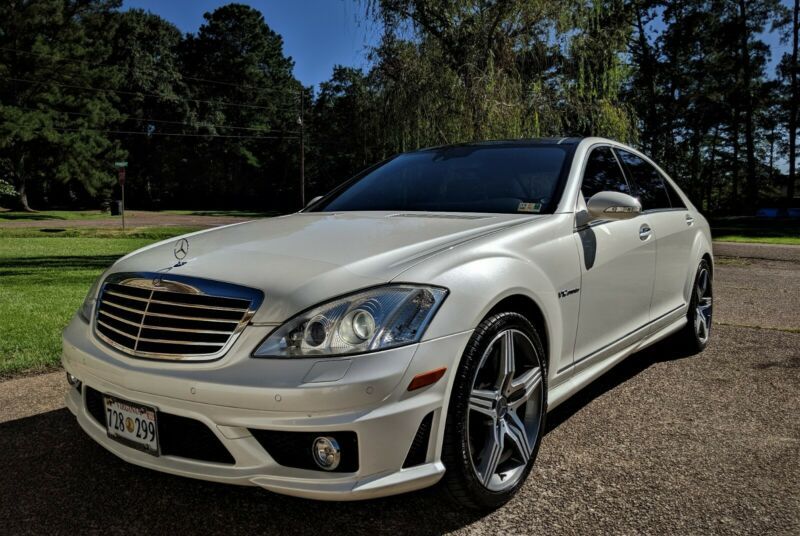 For Sale is my much beloved 2007 Mercedes-Benz S65 AMG. This shining example comes with its stock tri-coat white
paint job with black pano roof.
Extra Additions

Clear bra on front of vehicle, and behind rear wheels

Original bulbs, housings, and fog lights are all included

AMG Projector Lights, have original housings and LED bulbs included in case they aren't your style

New OEM windshield as of this year

Wiring and hardware for aftermarket sub from previous owner, dial on front corner of driver seat, cables in the
back, stock sub is currently installed and working

Why I Am Selling

I have found myself in need of a truck or SUV that I don't mind getting dirty and that can haul things. I will
really really miss this vehicle, as it has been incredibly reliable and an absolute blast to own, turning heads
wherever I drove. I was always proud to show it off

Front bumper left side: Some cracking from the last owner, I'm guessing they must have run over a curb at some
point. It has been glued to the point that it stays together and won't catch. Is honestly not noticeable from
standing height.

Rear right bumper: I had parked in a lot and someone backed into me while I was at the store and failed to leave
any information. The damage was paint only, but I haven't gotten around to getting it repainted, as I knew I had
some long road trips ahead of me and the interstate is rough on paint jobs.

Brake Calipers: some how the film has peeled off, most likely from age, resulting in the paint starting to rub off.

Right Fog light: must have been on a recent road trip, but it looks to me that a rock flew up and hit the glass.
Light still works fine, original housing included.

Brakes and Rotors were done JAN of 2018

Radar Receiver portion has been on the fritz lately, was replaced last year, all other aspects of the integrated
system are functioning well

Left center parking sensor only works in the rain. Replacement sensor comes with the car, however I was waiting to
paint it until I painted the bumper