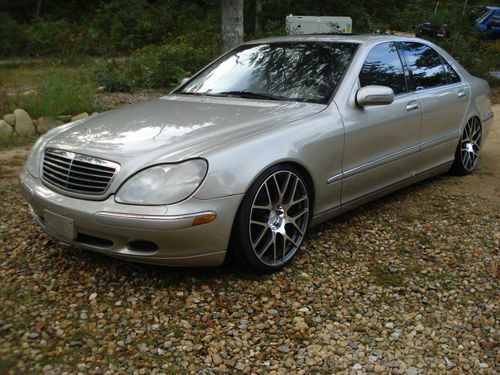 Condition: UsedA vehicle is considered used if it has been registered and issued a title. Used vehicles have had at least one previous owner. The condition of the exterior, interior and engine can vary depending on the vehicle's history. See the seller's listing for full details and description of any imperfections.Seller Notes:"CAR IS BEING SOLD FOR PARTS"

I had dreams about fixing this car up and painting it all black and making a bad ass family car, but I have no time and another baby on the way.  You can buy this car to part it out or continue the dream of fixing it up and driving it.
The Good- Car runs and drives.  Comes with rubber mats, carpet mats, a used black carpet set not installed, two new K&N Air filters, 2 new bumper marker lights- smoked lenses with bulbs, new hood release lever, car has 20" TSW Nurburgring wheels and tires that have 80%+ tread life remaining.  I had cut the mufflers off the car to make the V8 rumble and was going to make custom tail pipes.  It still sounds pretty tame.
Not so Good- Car has rust spots on exterior see the photos, Dents on the right rear quarter panel, also front and rear bumpers have dings and scratches from parking, the car smells musty inside from sitting, air suspension is deflated, it worked last time I moved it but is now deflated?  The gauge cluster has blacked out.  Carpet has numerous stains and smells.  (Have used black carpet set which is included in sale).  The center console is out so I could replace the shifter bushing.  All parts are there just needs to be reassembled.  The radio and navigation turns on but no sound comes out of the speakers.  Various functions of the interior sometimes work and sometimes don't.  Car upshifts good...downshift is a bit harsh may need filter and fluid flush.
Please if you are considering buying this vehicle know what you are getting into if you plan on fixing it.  That is why I am selling this car for PARTS.  These cars are complex and have lots of computers and functions and can be hard to diagnose if and fix unless you are experienced with Mercedes Benz.
Florida title in hand and written bill of sale at time of purchase.  Vehicle is sold AS IS/WHERE IS.  Car is located on Martha's Vineyard which is an island, surrounded by water and requires a ferry trip to get it to the mainland.  The car would need to be flatbed towed or trailered.  I don't recommend driving it very far with the suspension being so low.  Any questions or concerns just ASK ASK ASK!  I want a successful sale.  A bid id a commitment to buy the vehicle.  For an additional fee I can help with transport of vehicle to the mainland.  The ferry docs in Woods Hole, MA.  The opening bid is LESS than the cost of wheels and tires!  No reserve!  Bid to WIN!
Thanks for looking!