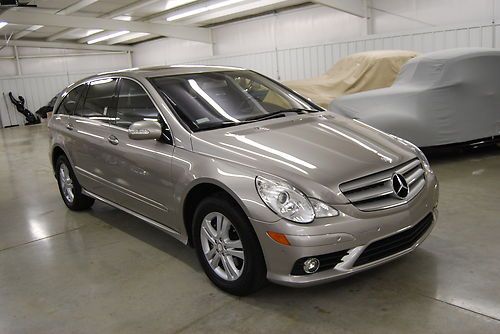 Condition: UsedA vehicle is considered used if it has been registered and issued a title. Used vehicles have had at least one previous owner. The condition of the exterior, interior and engine can vary depending on the vehicle's history. See the seller's listing for full details and description of any imperfections.Seller Notes:"One small door ding shown in pictures attached."

This 2008 Mercedes Benz R-Class, R320CDI, 4-Matic is in excellent condition.  We have owned this vehicle since new.  The vehicle has never been smoked in and has never been in an accident.  All interior surfaces are free of cuts, tears, abrasions, etc.  There is one small ding, which is pictured in one of the photos.  All service has been performed by a Mercedes Benz dealer, as per schedule, and all service is up to date.  In addition to the standard equipment, this vehicle has $16,280 of additional options.  To name just a few (many of which are included in the PO3 package): a rear-view camera, Parktronic, rear audio controls, DVD navigation, 3-zone climate control, Harmon/Kardon Logic 7 sound system with 6-disc CD changer, rear seat entertainment system, and the list goes on.  This vehicle has been used extensively for highway travel.  An indication of this is that the only brake service we have had done was new brakes at 79,458 miles.  The current set of tires was installed at 72,436 miles.  We have service records that accompany the vehicle along with the original MSRP sticker showing all standard and optional equipment.  All systems function as designed.  The original floor mats are as new and included.  This vehicle is garage kept.  It is currently located at our summer home in Western North Carolina.

There are NO warranties expressed or implied.
The successful high bidder will submit $500.00 through PayPal within two days of the close of auction.  Buyer agrees to pay remaining balance by bank-to-bank wire transfer within seven days of close of auction.  Pick up or shipping is the responsibility of the buyer.