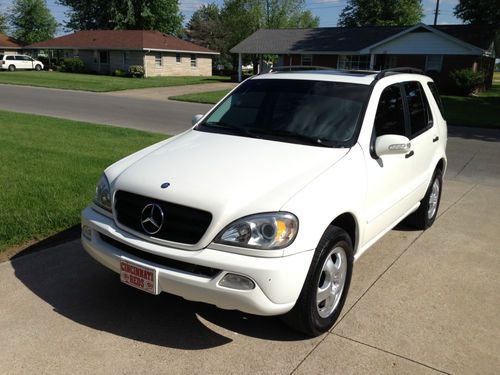 I just Bought a new car so this one has to go! Up for grabs is a NICE 4 owner Mercedes-Benz ML320 SUV with 123k miles. Clean car fax! This thing is loaded to the ceiling with options! The best part is... EVERYTHING WORKS GREAT! I will try to name a few options but i'm sure I will miss a bunch of them. Newer tires, New Brakes, All power windows, power sunroof, 6 cd changer. NAV ready phone ready, SOS, All tinted windows, projector lights, cruise, power seats, cup holders everywhere! Rear air, AC works great! 4WD V6 with low range off road capability. auto locks rear window wiper, all leather, power mirrors, auto dimming lights, auto headlights new battery, new air filter, oil changed last week, This is just to name a few! For its year this Benz is truly a great find and buy. Taken very good care of, recently waxed professionally. Small crack in driver side mirror, and back bumper, The interior carpet is gray so it has became a little discolored over the years but does not look new, A good cleaning or carpet dye would bring it back to life, and that is the only thing wrong with the car! This car is in very good condition. Make me an Offer! Call or text me! My name is clayton! (812)-530-6916