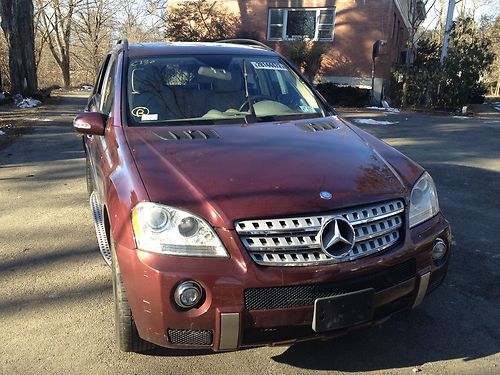 I AM SELLING A 2007 MERCEDES ML 500 5.0L V8.  THE CAR IS CLEAN INSIDE AND OUT, IT CAN'T START OR BE TESTED DUE TO SOPHISTICATED ELECTRONIC KEYS AND KEYLESS ENTRY  THE VEHICLE CAN BE REBUILT OR USED AS PARTS.  IT CURRENLTY HAS A NEW YORK STATE 907A DOCUMENT WHICH CAN BE CONVERTED TO A REBUILT SALVAGE TITLE.  THE CAR HAS APPROXIMATELY 85,000 MILES.  AMG RIMS AND TRIM ARE INLCUDED, THE CAR LOOKS IDENTICAL TO AN 2007 ML63 AMG MERCEDES.