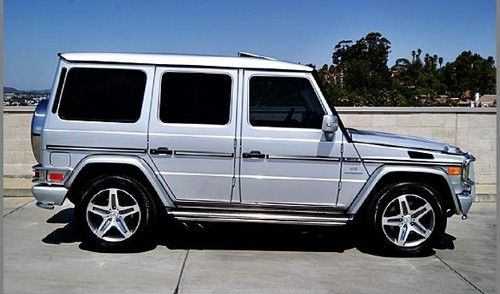 MUST SEE! FLAWLESS BEAUTY. 2008 MERCEDES-BENZ G-CLASS 4MATIC 4DR 5.5L AMG with just 34,000 miles. JUST SERVICED....Represented in IRIDIUM SILVER and complimented nicely by its upgraded DESIGNO Stitch and gorgeous DESIGNO leather interior. Maple wood optioned interior 493 HP (Super charged V8 Kompressor) complete with upgraded AMG new model year, 20 inch. Excellent condition on this car! You Will not find one like this with all bells and whistles on the market. FULL brush guard set, have not seen done on this type of car in the rear of the vehicle with full brush kit!!! .installed Ipod kit in glovebox...New aftermarket speakers integrated flawlessly in vehicle. All service just done on vehicle! Most of life a California car very desirable WON T LAST LONG! The G55 was discontinued in 2011 and now they are only building the G500. Neither of the engines are as desirable as the G55, making older G55 more valuable and desirable. Open to trades for rare vehicles of like kind . or outright sale Make an offer