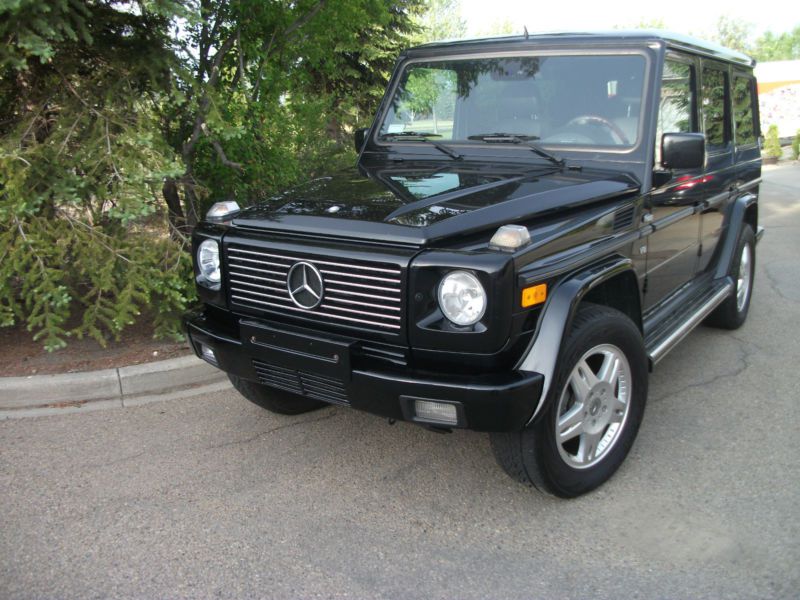 More details at: jennajccadotte@clubalfa.com . For Sale ....2002 MERCEDES BENZ Gelandawagen series G 500 four door .Low mileage at 089,849 kilometers in
Canada as shown in picture of the odometer on September 11 th 2015.
All original black paint and body panels have never had any body repair. I bought this vehicle from my brother in
November 2011. My brother bought this G 500 GELANDAWAGEN from the second owner south of Edmonton Alberta.
The original owner bought this vehicle from a Mercedes dealer in Toronto in 2002 ,that was imported from Austria .
I do not know exactly when the G 500 was brought to Alberta Canada,but the second owner in Alberta had owned this
for approx.3 years BEFORE my brother bought it in 2008 .
After long storage there are a few scratches and a few minor dinges . In the spring of 2015 ,i had a new Fuel Pump
installed and a new battery . During the full inspection this spring ...the mechanic found the left rear spring is
broken on the bottom coil. I now have a brand new pair of rear coil springs ,genuine Mercedes ...that go with the
vehicle BUT still need to be installed !
The glove box door handle release plastic clip recently broke. Not an easy item to find on E BAY, still needs to
replaced.Otherwise the interior is excellent ,no rips or tears and never smoked in from my family.
The Air conditioning is ice cold !
Any questions or concerns please email me.Please have a third party inspection to ensure satisfaction .