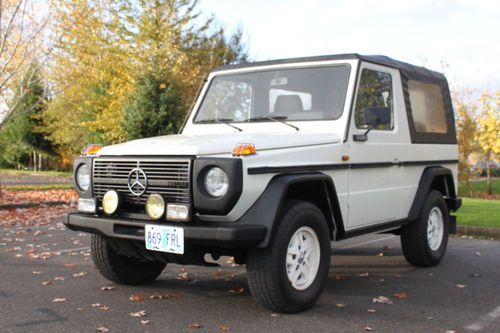 Up for sale 1983 Mercedes-Benz GE280 Cabrio. This type of Cabrio is very hard to find, from 1979 to now Mercedes-Benz  only build 20 Cabrios per year.The is why makes the cabrio hard to find in no rust or even rustbucket. The previous owner had owned the car for over 10 years in BC Canada. I had purchased the car from him over year ago and the car had some rust on the back penals under the tail lights. Power stering had a oil leck, valve gasket was leckig as well and front head light had a crack in side got rusty, the CD player was missing and the original steering wheel.

New paint on the car in 2010 . On the power stering leck I had replased new kit, I had not seen a oil spot on the garage floor . However I'm not driving the car so much I cannot guarantee if is fix the leck. I had instald new valve gasket .New head light was instald , new CD player . The back speakers sounds good only the front one is not very good as the back ones. The car comes with both steering wheels, tool kit, owner manual and first aid kit. The previous owner had instald new muffer and radiator. Soft top has some repair done on the right side and the is a cut on the rear window I had put clear tape over, and their is one more on the back gate window 2'' long. I had not seen any water  the got inside the car.There is a scratsh on the passenger door  I had put some touch up paint. The body on the G is very straight, however this is 30 years old car. For this 30 years old car i will say the is very good condition.

In  line 6 cylinders, 4 speed manual, 4x4, high and low, lock differential all in working order.The tiers about 60% good. This car is not a race car or driving  fast on freeway with a four speed transmission. Odometer is showing 75730 kilometers , however if is 175730 or 75730. The speed odemeter is still in kilometers not in mileas. I had drove this car from Canada to Vancouver WA with no problems at 110-120 kilometers in hour with no problems or any vibration. I had use this car aroud town only, never had took it off road. Please look at the photos the are been taking one day before.

I had descride the G wagon in best of my knowledge.The car is sold as is with out any warranty or return back for any reasons. You are welcome to do pre-purchased inspections or come and test drive it,  before the auctios ends. No inspectios after it sold. If you decide to drive the car cross-country you are on your own risk. Please dont asking about the reserve price , the reserve is very reasonable. I'm open for  offers to closed the auction early, please no low ballers. $500 Deposit is due in 48 hour after the auction ends. Canada or international buyers are welcome. For any qustions please call at 503-327-3848.