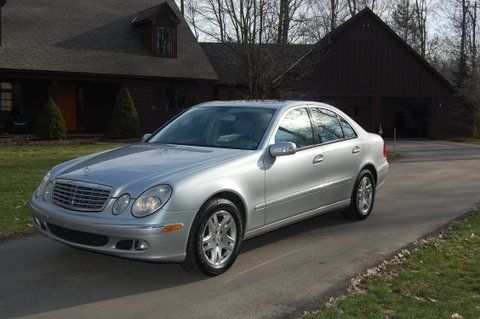 Up for sale is a 2006 E350 4Matic. I'm listing this car for my girlfriend's parents. We've been together over 4 years and I have driven the car and ridden in it extensively so I'm quite familiar with it. Don't want to give too much info on that, but I don't like to leave questions unanswered!

The car has 141k (a little under) on the clock. They have already purchased another car, so this one isn't being driven at the moment. It has always been dealer maintained and mileage is mostly highway from southern to northern MI, or MI to MO. I know they have always taken great care of this car and haven't skimped on repairs or maintenance. This car is VERY clean for the mileage. It also hasn't been driven much in bigger cities, so there aren't much in the way of door dings, etc.
New brake pads installed last year (around Feb), and new tires installed Oct. 2012.
Now for the negative stuff...
There is a ding under the passenger side mirror. I'm not sure what it's from, but it looks like paint damage was minimal.
There is also a scuff on the rear bumper. Someone apparently tapped the rear end recently. There doesn't appear to be any bumper damage, so some buffing would probably go a long way and some paint touchup might be required.
The car is in the Grand Rapids area of Michigan currently and is available to be seen as well. I will help to answer any questions you might have as well. Thanks and happy bidding!