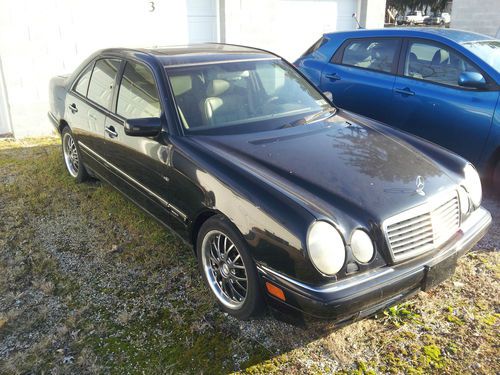 my car was running odd like it had a misfire at rest so I replaced the spark plugs, wires, and the coil packs thinking that was all the problem was seeing as that was the engine code it was throwing. I also did a full tune up, fresh battery, while i was into it that far but that didn't fix the problem.  My mechanic then said that it was a vacuum hose making the problem after further investigation into that engine code for the specific model.   Im trying to start a small business and don't have the time or money to complete the work so i would like to sell it as fast as possible. the car also has minor damage to the passenger side fender that i will detail with pictures and also needs tires.   I have some new brake parts and a few other things to get you started on the repairs if you pay the asking price of $4000 if not i will simply return them to NAPA.   I believe the car is priced to sell considering the KBB price for poor condition for the normal E320 is $6100 and I have over my asking price in the AMG suspension.  Clean title in hand.  buyer responsible for shipping