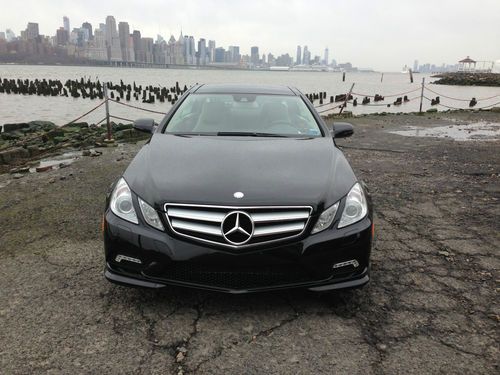 Condition: Used: A vehicle is considered used if it has been registered and issued a title. Used vehicles have had at least one previous owner. The condition of the exterior, interior and engine can vary depending on the vehicle's history. See the seller's listing for full details and description of any imperfections. ...
FOR SALE 2010 MERCEDES-BENZ E550 COUPE.
***LOADED***
8 CYL, AUTO
382 HORSEPOWER
NAVIGATION, REAR-VIEW CAMERA, GLASS PANORAMA ROOF,WOODEN STEERING WHEEL,HEATED/COOLED SEATS,
BLUETOOTH, XM RADIO, HARMAN/KARDON AUDIO,EVRYTHING POWER.
THIS CAR WAS LIGHTLY FLOODED DURING SANDY STORM. ONLY CARPET WAS WET. CAR WAS CLEANED AND DRIED BY PROFESSIONAL SHOP UNDER MY 100% CONTROL.
HARNESS INSPECTED - NO RUST. ALL COMPUTER MODULES 100% FUNCTIONAL. ENGINE/TRANSMISSION - 100% FUNCTIONAL. CAR HAS NO ISSUES OF ANY KIND. MUST SEE!!!
FEEL FREE TO CONTACT ME FOR MORE INFORMATION:  201-478-2686.

Mechanically, this Benz is in perfect condition and runs and drives great. It has  very strong 5.5L 8-Cyl. motor. And a automatic transmission that shifts perfect. The car has always been serviced at authorized Mercedes Benz dealership and really is fun to drive. This car is very clean under the hood and really shows how its previous owner took excellent care of it.  All services where completed by Mercedes Benz

This car is ready to go! The car is in excellent condition inside and out. The exterior of this E550 is stunning  and is loaded with a lot of desirable factory options. This car was over $63k new and here is your chance to own it for a lot less then that.

The Mercedes-Benz E-Class has been thoroughly redesigned for 2010. The 2010 E-Class models are generally more angular than their predecessors, with sharper creases. Automotive styling is a subjective process, to be sure, but the new E-Class has been lauded from many corners for its character and pleasing design.

With the redesign, Mercedes has also re-aligned the E-Class nomenclature. Besides the familiar sedan and wagon, the line-up once again includes an E-Class Coupe and Cabriolet (or convertible), which replace cars that had been known as the CLK since the mid-1990s. All E-Class models share the same underpinnings, and nearly identical exterior dimensions.

Styling for all E-Class variants is quite similar, too, at least from the windshield forward. Every design cue, panel, lamp and piece of glass has been changed compared to the outgoing models. And although they tend to look bigger than their predecessors, more like Mercedes' premium S-Class, they really aren't. The new E-Class variants share a larger grille, and a new trapezoidal headlamp array with multiple elements and square corners instead of the traditional E-Class oval lamps.

From the windshield back, the new E-Class models differ, of course. The two-door Coupe's roof flows more evenly than the sedans, with a less prominent notch where the rear glass tapers downward. Yet all variants share a set of four lines rising from front to rear in or on the body. Rear lamps are similar on Coupe and sedan, as are the rectangular exhaust tips built into the bumpers, rather than hung below them.

On one hand, the 2010 Mercedes E-Class interior has a completely new look, just like the exterior. On the other, the E-Class retains enough Mercedes-style interior appointments to make it comfortably familiar to previous E-Class owners.

Seat-shaped seat controls high on the door panels and seat heating/cooling controls at the very bottom of the center stack make it easy to adjust important things quickly. Textures and color schemes are familiar Mercedes, too. With the darker interior colors and standard burl walnut trim, the E-Class can create a slightly somber tone inside. Yet in all cases the cabin exudes a classy, understated elegance.

The dashboard in all E-Class variants in identical. The forward door panels and center console are similar as well, though they're trimmed a bit differently depending on the model and equipment ordered.

Mercedes' familiar three-gauge instrument cluster has been supplanted by a package of five analog gauges, including two pairs that overlap each other. All are exceptionally crisp and easy to read at a glance. Nonetheless, the E-Class dash is dominated by something Mercedes calls its COMAND system, which sits front and center at the top of the center stack.

COMAND is a seven-inch color display screen with standard in-dash, six-disc CD/DVD changer and a Bluetooth interface that allows phones to be operated through the car's audio system, even if they remain in a purse or pocket. Using a point-and-click controller on the center console, this central display can be controlled by either the driver or front passenger to adjust audio and other functions. Most features, including climate controls, can be adjusted with their own separate switches lower in the center stack. The COMAND display also shows the optional navigation screen, the back-up camera image, and the night vision infrared display.

The E-Class front seats are new, with a less bulky design that is still quite comfortable and supportive for long stints at the wheel. There's plenty of adjustment in the seats and steering wheel to accommodate nearly any sized driver. The wheel itself is thick and wrapped in nice leather, with multiple buttons to control audio and phone. Mercedes' familiar stalked-mounted cruise-control switch remains, and it still looks too much like, and is too easily mistaken for, the turn-signal lever. The new gear selector is a lot like a turn signal, too, on the right side of the steering column. E-Class cars ordered in Sport trim have paddles behind the steering-wheel spokes for manual gear selection.

All E-Class variants come standard with new active safety features. The big-ticket item is Attention Assist, which constantly monitors up to 70 driving parameters to determine whether the driver is getting drowsy behind the wheel. If it decides a driver is at risk of dozing, Attention Assist uses both visual and auditory warnings to tell the driver to pull over, get some rest, or get a cup of coffee.

The Distronic Plus cruise control option is offered with both blind-spot warning and lane-departure warning systems built in. An intelligent self-adjusting headlamp system uses cameras to detect both oncoming cars and the traffic ahead, and raises and lowers the headlamp beams accordingly. The idea is to put the most light on the road most of the time, without disturbing other drivers. The new Intelligent Nightview option throws infrared light in front of the car and then uses high-resolution video cameras to spot the higher temperatures coming from otherwise invisible pedestrians and animals.

The middle seat in back of the E-Class sedan is reasonably comfortable for a small-to-medium-sized adult on a short trip. The outboard rear seats in the E-Class Coupe are actually a bit more inviting than those in the sedan, even though they're more difficult to climb into in the absence of rear doors. The Coupe's rear seats offer decent legroom, and they're more heavily contoured than those in the sedan. The built-in rear console adds a luxurious, limousine-style touch.

Neither interior nor cargo space in the new-generation E-Class have changed significantly; they are about the same as the previous model's, and the car can be ordered with split folding rear seats for additional cargo flexibility.

Trunk capacity remains at the top of the class, matching the Audi A6 at 15.9 cubic feet, and surpassing the Acura TL (13.1 cubic feet), BMW 5 Series (14.0), and Lexus GS (12.7). The E-Class Coupe has as much trunk volume as the sedan. The E-Class Cabriolet, on the other hand, loses a substantial chunk of trunk space to the storage area for the folded convertible top.

The E350 wagon expands cargo capacity even further, and its standard all-wheel-drive and self-leveling rear air suspension allow a substantial towing capacity of some 2,500 pounds. The wagon features a power-fold mechanism that lowers the split rear seatbacks with buttons near the tailgate, as well as an automatic tailgate that can memorize a desired opening height. The wagon will come standard with a folding third seat in the cargo area when it hits U.S.