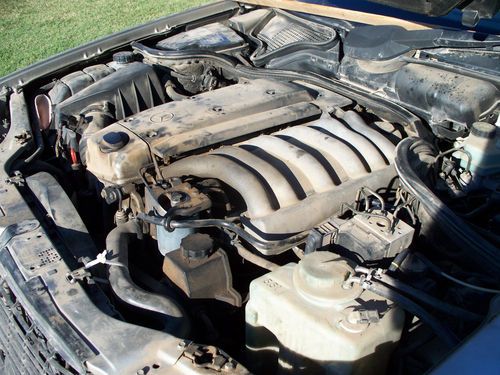 Condition: UsedA vehicle is considered used if it has been registered and issued a title. Used vehicles have had at least one previous owner. The condition of the exterior, interior and engine can vary depending on the vehicle's history. See the seller's listing for full details and description of any imperfections.Seller Notes:"THIS CAR HAS SOME HAIL DAMAGE, IT IS MISSING THE HOOD ORAMENT, IT COULD USE A PAINT JOB, THE AIR CONDITIONER DOES NOT WORK. THEIR IS A LEAK SOMEWHERE. IT HAS A NEW COMPRESSOR. IT WILL NOT START AND I HAVE NOT TAKEN IT IN TO A MECHANIC. ONE OF MY EMPLOYEES DROVE IT HOME AND THE NEXT MORNING IT WOULD NOT START. IT CRANKS OVER GOOD AND DOES NOT MAKE ANY NOISE. IT MAY BE A SENSOR OR A PLUG FUILD LINE OR IT COULD BE THE FUILD PUMP OR MAYBE THE INJETURE PUMP. IT MAY HAVE SOME OF THE TRIM MISSING. WHEN IT QUIT STARTING I HAD BEEN DRIVING IT TO WORK AND BACK AND IT GOT RIGHT AT 30 MILES PER GAL."

THIS IS A 1998 MERCEDES E 300 TURBO DIESEL WITH A 3.0 LITER 24 VALVE 6- CYLINDER FUEL INJECTION. IT HAS A LOT OF MILES ON IT BUT IT DID NOT USE MUCH OIL WHILE I WAS DRIVING IT. WE PUT ABOUT 60000 MILES ON IT AND OUT SIDE THE AIR CONDITIONER WE NEVER HAD ANY TROUBLE WITH IT. I PAID JACKIE COOPER MECHANICS ABOUT $3400 TO FIX THE AIR BUT THEY NEVER GOT THE JOB DONE, THEY REPLACE MOST OF THE HIGH DOLLAR PARTS BUT THERE HAS TO BE A SMALL LEAK SOMEWHERE. THE TIRES ONLY HAVE ABOUT 3000 MILES ON THEM.THE RADIO WORKS REAL GOOD BUT THE CD PLAYER DOES NOT WORK. IF YOU CAN FIGURE OUT THE STARTING PROBLEM THIS WOULD BE A NICE WORK CAR.