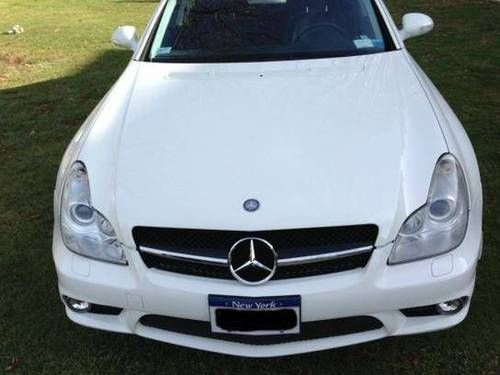 2006 Mercedes CLS 500 8 CYL 5.0L AMG package. Best Color combination White with black leather. Vehicle is in immaculate conditions has service records to certified Mercedes Dealership only. Vehicle has following options: AMG package $4950 DVD Navigation $1240 Heated Front Seats $640 Electronic Close Trunk $510 Keyless Go $1080 Xenon lighting package $1220 Harmon Kardon Sound system 980 brought the MSRP to $77,645. Ipod hookup. Air ride suspension. This car has 97 k miles and is in amazing shape. This color combination is rare and is the most desirable.  If you want a real mercedes in amazing condition look no further. Im sure if your looking at this vehicle you already know about it, but I can send photos or answer any questions you may have. Vehicle is being driven as it is posted. Have all service records and receipts from authentic Mercedes dealership. I encourage any potential buyers to come look at the vehicle in person so you know and feel comfortable about the overall condition of the vehicle.