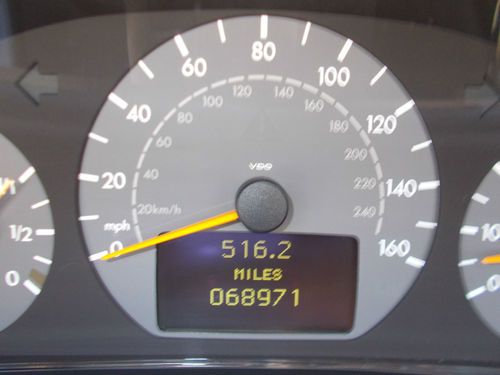 Summer is coming! I am selling my MINT CONDITION Mercedes 430 CLK V8 Convertible.  It has only 69000 miles!  That's not even 7k a year!  Over $1000 below KBB!  The car is extremely clean and well taken care of.  In the last year, I installed all new brakes and rotors, air filter, and cabin filter.  Synthetic oil changes on a regular basis.  Tires are in very good condition.  Everything WORKS on the car.  Convertible top is in great condition. Dash in perfect condition.  Fully loaded.  New seat covers that cost 200.00 so you stay cool in the summer and warmer in the winter.  There are a couple of very small scratches on passenger side rear panel at the botton but hardly noticable unless you get up extremely close, a few scratches on the passenger seat but the new covers are on (no tears or rips anywhere on seats) and glove compartment will not close.  All it needs is for the latch to be fixed.  Just don't have time right now. This car will last a long time!  Please note, that I have a loan on the car.  The title can be supplied via fed ex within a few days once payment is made.  You will leave with the keys and car in hand upon purchase.