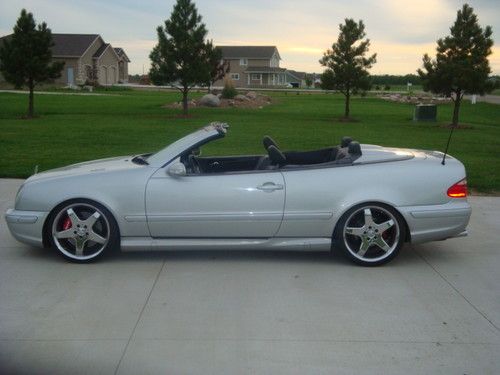 Everything works and looks great inside and out, with exception of pixels are out on the dash that shows the exterior temperature.

Black leather with BOSE sound, 6 disc changer, power everything including top, 19" chrome wheels with nearly brand new tires, and at the heart is a Supercharged V8 with Kleemann headers

and full Kleemann exhaust.  The result an absolute blast to drive 430+ horsepower and over 400 torque car that is extremely reliable and still gets 25 MPG if you behave.

Search Car and Driver CLK43K for more info, the test car they had did not have headers or exhaust.

California car first 10 years of its life, i have had it for about a year and put on roughly 700 miles. It sits in the garage and has never seen snow, rain, or even dark of night.

I purchased this car for family outings and short trips, but turns out my two young boys would rather drive with the top up than down.  This makes it rather pointless to have a 2 door convertible

in the garage while my work car sits outside.

If possible come take a look for yourself - you will not be disappointed.  I have this car for sale locally and may end the auction at any time.

CHECK MY FEEDBACK AND THANKS FOR LOOKING!