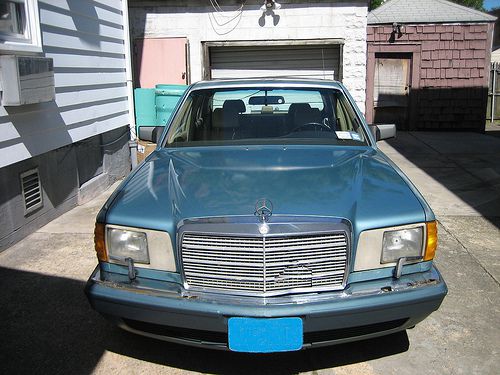 Condition: Used: A vehicle is considered used if it has been registered and issued a title. Used vehicles have had at least one previous owner. The condition of the exterior, interior and engine can vary depending on the vehicle's history. See the seller's listing for full details and description of any imperfections. ...
Very Nice Classic High End 1991 Mercedes 560 sel
This was the most exclusive and most expensive Mercedes available in 1991
I am only the second owner of this Flagship Benz
The car is fully loaded with Every Option Possible for this car including,
Power Everything Leather Sunroof CD player Cruise Control Heated Front Seats Reclining and Heated Rear SeatsSlip Control and much much more...
The car has always been exceptionally maintained and cared for
Mechanically it is in excellent shape with all needed work done
Cosmetically it is in decent shape with minor imperfections mostly just spots of paint fading due to age,
chips on the bumpers (wear and tear normal for its age)
I PUT MUCH MORE MONEY INTO THIS CAR THAN WHAT I'M ASKING FOR IT
I invested over $15,000 into the car over the last 5 years making sure to keep it in great mechanical and
driving condition since it was my daily driver.
I literally changed almost everything in the car including:
Suspension (all idle arms, joints, shock absorbers, coils, etc)Exhaust system from the catalytic converter onComplete engine tune upComplete transmission tune upNew radiatorNew water pumpNew thermostatNew detachable face radio with CD playerNew alternatorNew BatteryAll new gas linesAll new brake linesAll filters (air, gas)All new gasketsAll new mounts (engine, transmission)Brakes, oil, etc.
200k mostly highway miles. The car was Never in any accidents (someone backed up into
the front grille 5 years ago at less than 10 mph...nothing was affected except for a crack in the grille
which you can see in the pics). Clean history and Clear title on hand
Asking only $2600 or best offer
You can reach me via email or at (646)773-2442