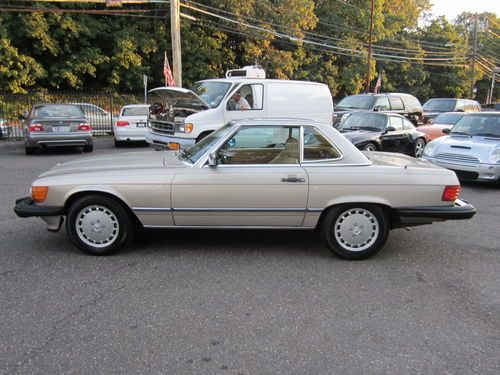 Condition: UsedA vehicle is considered used if it has been registered and issued a title. Used vehicles have had at least one previous owner. The condition of the exterior, interior and engine can vary depending on the vehicle's history. See the seller's listing for full details and description of any imperfections.Seller Notes:"SOME PAINT IS FADED, WEAR AND TEAR IN INTERIOR"

1988 MERCEDES BENZ 560SL CONVERTIBLE, SMOKE SILVER WITH BROWN INTERIOR, LEATHER, ALL ORIGINAL, HARD AND SOFT TOP, AUTOMATIC, CAR NEEDS A LITTLE TLC. INTERIOR HAS SOME CRACKS THAT COULD BE REPAIRED AND PAINT ON HOOD IS FADED. NO RESERVE AUCTION. LAST BIDDER WINS. CALL WITH ANY QUESTIONS AT 917-628-7989