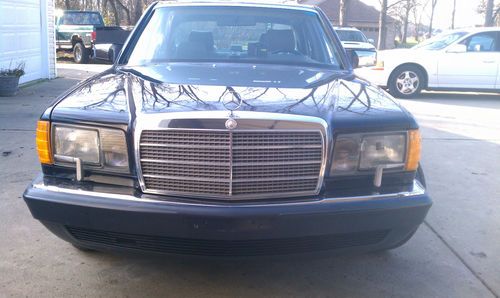 Up for sale is my 1990 420SEL tank I mean car only because I bought a Mercedes S600. This twenty two year old beauty has been garaged most of it's life by proof of the dash pads and interior has no fading.
I will give a quick history of the car after the recent improvements.
First and most expensive was the NEW suspension. Car has four new springs, four new shocks and four new Michelin tires. She rides like new. The front end suspension was replaced by the former owner who was in the Indianapolis area where I bought the car.
Next is the new brake pads all around. The rear rotors and pads where just done in the middle of January, have less than 300 miles on them. Nice smooth quick and quite braking.
The car has an almost new high performance tune up that included cross fire Platinum plugs and a new performance air filter. All of that raised my mileage about three miles per gallon and made the car start and accelerate much better. Premium fuel only is required and is all she has had. The cruise control was also just fixed with the purchase of a new control module that was over two hundred.
All things work as they should with one small problem being the sun roof goes up but stopped going back after I had the car a few months.
Now the history of the car goes like this, she spent her first ten years or so in northern New York and then about ten years in Miami Florida. Back up north to Indianapolis then over to me in the Columbus Ohio area. She is garaged all the time except when I am driving her. The top of the car has been repainted sometime in the last few years before I got her and it looks great . Most have been the Florida sun did it in. The front clear lens where replaced and still look new no yellowing.
Pioneer CD player works great through all the speakers including the console fader. The car has no body rust and interior is unbelievable for a twenty two year old car. This car is super smooth and quite and gets 18 to 19 on the road. She is ready for another 150,000 miles. They just do not build them with this kind of quality anymore. I expect her to sell for close to my asking price or I will keep it and be payment free for the next ten years.
We will be glad to bring her to her new stable once payment has cleared for FREE !
Call or email me with any other questions.