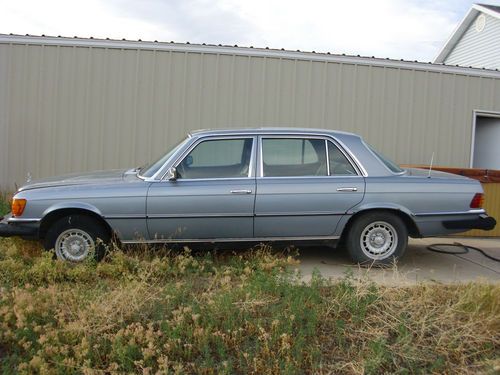 Condition: UsedA vehicle is considered used if it has been registered and issued a title. Used vehicles have had at least one previous owner. The condition of the exterior, interior and engine can vary depending on the vehicle's history. See the seller's listing for full details and description of any imperfections.Seller Notes:"Vehicle has some rust and is not running at this time and the paint is fading also the rear bumper has some damage where the cast parts are broken off. needs some tlc."

Hi I have for sale a 1979 Mercedes 450 SEL. We purchased this from a person in Evanston Wyoming for $2500.00. We drove it to Yellowstone and on the way back home to Utah it started to leak gas from the fuel pump and the hose behind the passenger side rear wheel and had to have it towed home. I purchased this for my son to restore it for his birthday and never done anything with it so it has sat in our yard for 3 years and it is now time for someone else to restore this beauty. It has several rust spots and the paint is fading in several areas. I do not know much about this car other than when it was running it was probably the fastest and most smooth riding car I have ever driven. I am not sure why it has a rebuilt title I cant see anything major damaged. The car is not running and SOLD AS IS NO WARRANTY NO GARANTEE. I will deliver up to 500 miles from Salt Lake City Utah in any direction for $1.50 per mile each way and must be paid up front in cash. Payment must be received within 3 Days after auction ends. Cashiers Check or Cash only.  If you use the BUY IT NOW I will throw in 4 brand new snow tires that have not been mounted yet.Thank you.