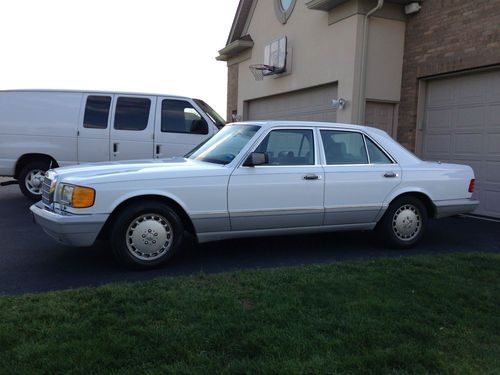 I am selling my mothers 1991 Mercedes Benz 300 SE.  She purchased this car last fall after selling her other Mercedes. She now wants a SUV, so it is time to sell it.

This car is super clean and very original.  It has a low 117k miles, and looks and drives great.  Since purchasing we have had new brakes, a new muffler, head gasket, and a few other small things done to make it perfect after it sat for many years.  The engine runs strong and is smooth.
We have summer tires, as well as a set of winter tires for the car.
There are a few blemishes (shown in photos), but it is well above average inside and out for a 22 year old car.  The paint shines great, wheels are clean and original, leather are carpets are clean and fresh.
All accessories (sunroof, power antenna, etc) are all fully functional.
The radio has been replaced with an Alpine CD player, other than this everything is stock and original.
Al  the work has been done, and it is just a clean honest car that needs a new home.