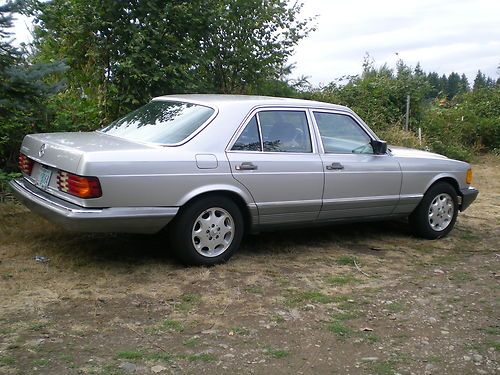 Condition: UsedA vehicle is considered used if it has been registered and issued a title. Used vehicles have had at least one previous owner. The condition of the exterior, interior and engine can vary depending on the vehicle's history. See the seller's listing for full details and description of any imperfections.Seller Notes:"1985 Mercedes-Benz 380 SE finish in Silver and matched with beautiful Blue leather interior."

The vehicle has 169600 original garage kept miles and shows like a 50k mile car.

Silver exterior paint is exceptionally glossy and is well complimented with bright and clear chrome trim.

The dash has a sun crack but shows no sign of fading.

The car runs and drives beautifully and and has no mechanical issues and does not leak any fluids. Brakes are excellent.

The car has matching tires and has 75% or so tread remaining. Has original spare tire and jack.

All doors and jambs are spotless and engine bay is clean.

This is a beautiful, clean and well maintained auto.