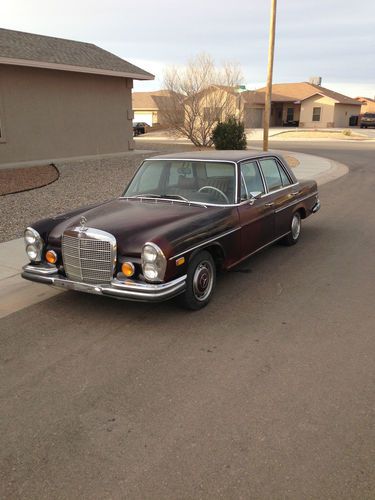 Condition: Used: A vehicle is considered used if it has been registered and issued a title. Used vehicles have had at least one previous owner. The condition of the exterior, interior and engine can vary depending on the vehicle's history. See the seller's listing for full details and description of any imperfections. ...
I offer my 1972 MERCEDES BENZ


This car is in great condition... everything is complete, the chrome around looks pretty good. I already started to rebuilt the dash a refinsh the wood in it, so some parts from the dash a already apart.. everything is there, AC, Radio, Dash...


The car needs a new paintjob and a lot of cosmetic work, there is for sure some rust.


You can drive it, its still a daily driver without trouble, runs, drives and shifts good.


If you bet, the price is firm, this is an old car, so please take a look before you bet, i can't explain everything on this car, its already 40 years old...