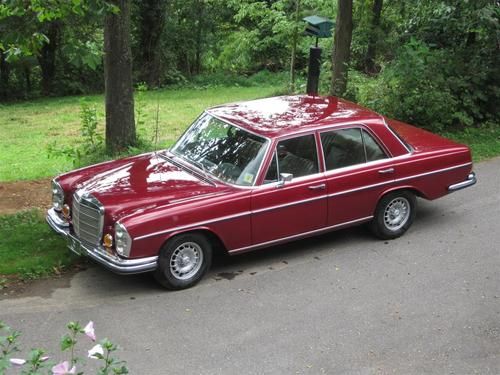 Condition: Used: A vehicle is considered used if it has been registered and issued a title. Used vehicles have had at least one previous owner. The condition of the exterior, interior and engine can vary depending on the vehicle's history. See the seller's listing for full details and description of any imperfections. ...
1968 Mercedes 280S with 1988-300 SE Engine with ECU and O2 sensor, W 126 gas tank and 4.5 model  3.27 rear axle .
Purchased in 2007 (72415 miles) this 1968   280S took me 3 Months to convert & restore in my  shop up here in NC. I painted this Classic myself in Spring of 2012 with Glasurit 2 K finish # 512. This Car's paint has never been buffed so the top coat will last for many years.
This car comes with a Audiovox cruse control, all good MB-tex interior, arm and head rests, 3 point  seat belts in front, New electronic speedometer (now 10,327 miles) a Becker vintage  radio (with I-pod cable), 4 wheel disc brakes vented in front, 3.27 Differential (gas mileage about 20), Michelin 205-70-14 tires, a choice of Fuchs alloy rims or steel wheels with hub caps and refinished wood trim.The bulky license lights are replaced by bumper mounted  units. This  Companion has no rust and we do not drive her on winter salty roads . We enjoyed the car on our last years cross country trip (6,200,miles) without any trouble and the AC was working fine also. It is time for someone else to enjoy  it now. I am willing to continue maintaining it for someone who is driving the car like I did.
This 108 model car with it's  rejuvenated drive train is one of a kind good running Hot Babe Classic without any rattles or squeaks (now that's hard to find on any conversion). This car is in good condition, safe and a good investment you can show and enjoy driving.
For specific detailed pictures or any Questions call  JZ at 828-776-1950