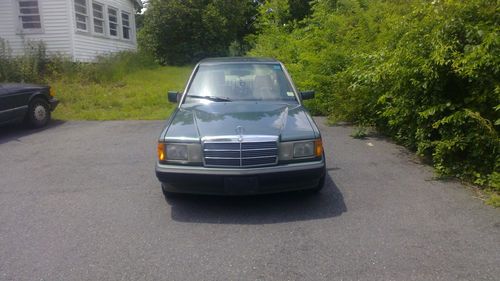 FOR SALE MERCEDES 190E 1993 2.3L
4 CYLINDER,REAR WHEEL DRIVE
IN ALMOST PERFECT CONDITION,IT HAS 85,300 MILES
ITS SUPER CLEAN IN & OUT.NO DENTS NO RUST AT ALL
THE SEATS PERFECT NO RIP OR WEAR ON THEM
LIKE BRAND NEW
ITS HAS ALL ORIGINAL PARTS.
JUST THE STEREO IS AFTER MARKET
THIS  CAR CAME FROM FLORIDA ABOUT 2 YEARS AGO
NEVER SEEN SNOW OR BAD WEATHER
ITS A REAL CLEAN CAR
THE TRIP ODOMETER IS NOT WORKING THE ONE THAT COUNT UP TO 999 MILES.
THE DRIVER MIRROR HANDLE BROKEN.
OTHER THAN THAT EVERYTHING IN GREAT SHAPE.
I HAVE THE MANUEL BOOK,THE ORIGINAL FIRST AID KIT
ANY QUESTION PLEASE ASK BEFORE BUYING OR BIDDING
HAPPY 4TH OF JULY TO EVERYONE
BUYERS OUT SIDE OF 48 UPPER STATES HAS TO BUY FULL PRICE
WITHIN WEEK FROM ENDING THE AUCTION
THANKS FOR LOOKING