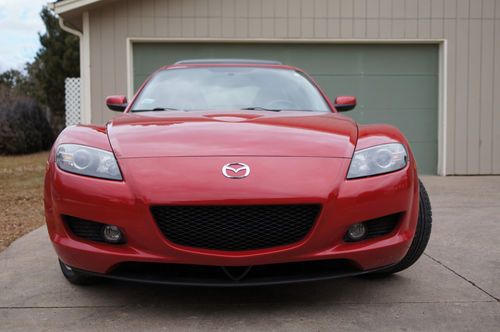 Up for sale is our 2004 Mazda RX-8 Grand Touring, Red exterior color with 6-speed manual transmission.  This RX-8 has only 4,4000 miles and clean title.

We purchased this car from a local dealer mainly to commute to my job in Dec 2012.   Then within 2 weeks since we purchased this car, my older son was diagnosed with leukemia and he has to go through a 3.5year-long chemotherapy. Obviously this is a financial challenge for us and we had to decide to sell this RX-8. We moved to a new apartment so that I can bike to my job. Now we are ready to sell this RX-8. This is truly the only reason we are selling this car so soon.
Runs great, very fast, fantastic, clean, fun car. Because this is our very first rotary engine (although we had lots of Mazdas before), we purchased a service contract with this car.  This is a transferable premium coverage ($2000 value) through VehicleOne.   We just had a checkups on this car and a water pump has been replaced today (which is of course covered by the contract).  This contract expires on 12/22/2015 or when the mile reaches 7,9500miles, whichever comes first.   Rear def oil, transmission oil. engine oil, coolant, and cabin air filter have been changed within last 2 weeks.
What the VehicleOne service contract covers?  Please see the last 2 pictures.  The premium coverage covers everything listed on these 2 pages except the last 2 parts; Wear and Tear and Luxury Electronics Package.   I think this auction is a great bargain considering the condition of the car, even the Buy-it-now price....
The exterior is beautiful, with a small dent on the hood but otherwise we think this looks great for the age.   Tires look brand-new.
The interior also looks great. With some minor scratches but nothing major.  The ash tray rid seems having a broken spring so doesn't open by itself but you need to open with your fingers.
This car is going to be sold "as is" condition.  Although we have had a check-ups last week, we are not auto experts so please check the pictures carefully and please ask any questions you have before you place a bid.
Auction winner has to arrange pick-up/shipping.    Immediate deposit of $500 USD is required.
Thank you for watching and good luck!
PS.  Sorry for the cancelation of the auction I made a couple of hours ago.  There was a loss of communication with a person who told me to buy immediately.  That's the reason I had to cancel the auction.

Take a long, hard look, folks. This is the refreshed 2016 Mazda CX-5, which makes its debut at the Los Angeles Auto Show today. And if you're thinking, "Say, that looks just like the old one," you really aren't alone. The visible updates certainly aren't major - Mazda has instead focused on giving the already-good CX-5 some thoughtful upgrades to make it a more attractive package than ever.
Outside, there are some slight changes to the styling, including new LED light signatures at the front and rear, as well as redesigned foglamp housings. Uplevel models also ride on attractive new 19-inch alloy wheels, with a dark finish.
Under the hood, it's all the same. Mazda's Skyactiv 2.0- and 2.5-liter four-cylinder engines carry over, with 155 and 184 horsepower, respectively. Front-wheel-drive, 2.5-liter models get a small bump in fuel economy, too - the CUV is now rated at 26 miles per gallon city and 33 mpg highway, up from 25/32. Models equipped with the automatic transmission now benefit from different drive modes, as well.