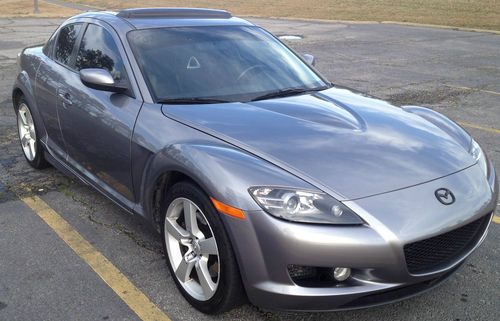 If you're looking for an RX-8, this is the one. New engine installed 5,000 miles ago by Mazda. If you have researched the RX8, then you know the original rotary engines often go out after 60-100k miles.
This car has been treated great, cosmetically and mechanically. Professionally detailed often and oil and all fluids and maintenance performed religiously. This car had an 8 year extended warranty so everything was always professionally dealer serviced.
While it was in for the new engine, it was given a thorough inspection for all other components and everything checked out good.
Bridgestone Potenza Sport tires, rear two are brand new, front two have good tread as well.
Starts right up with no flooding issues, I am not the original owner, but can say the car has always been started and stopped properly since the new engine. Basically not letting the car warm up over a long period of time is usually what led to many of the RX8 engine failures.
This car is a blast to drive and actually was the Sports Car of the Year when it came out. The handling and suspension is on par with high dollar exotic sports cars. Fully loaded, has every option that was available except obviously the rear spoiler. I prefer the cleaner look, but oem spoilers are available on ebay for less than you probably think.
The only thing I have planned other than regular maintenance if I was going to keep this car a while longer are the front rotors. They aren't bad and brake fine, and alot of people wouldn't notice but you can feel it slightly when breaking and hear them if you listen.
Other than that, this car is in amazing condition cosmetically and mechanically. No photo shopping on the photos, what you see is what you get.
Heat, AC, all power options, CD changer, etc, all work great. No quirks at all.
Any questions or if you want a photo from an angle I might have missed please contact me. I will be glad to arrange an in person inspection or test drive for serious buyers.