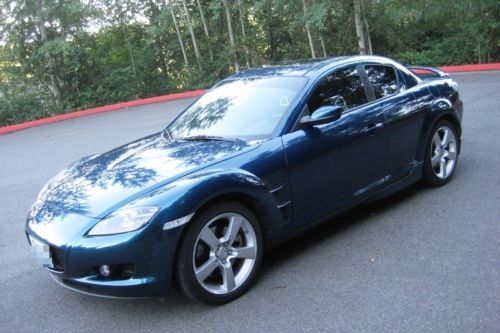 Condition: Used: A vehicle is considered used if it has been registered and issued a title. Used vehicles have had at least one previous owner. The condition of the exterior, interior and engine can vary depending on the vehicle's history. See the seller's listing for full details and description of any imperfections. ...
If you're looking at this listing, you probably already know all about the legendary RX-8's lightweight chassis, nimble and responsive handling, suicide doors with 2+2 seating, and of course the amazing 212hp Renesis rotary motor with an astronomical 9000rpm redline. There are very few sportscars that can legitimately compete with the RX-8's incredible handling dynamics. Only the S2000, Miata (albeit with far less power), and the new FR-S/BRZ.
We have too many cars and no longer have room for all of them, so sadly a couple of them have to go. I can't stress enough how much this is basically a new car due to the immaculate condition and insanely low miles. It comes in the rare eye-catching Phantom Blue Mica color that shifts with light/angles. You really have to see it in person to fully appreciate it. Throw in the GT package with every option available and the 6speed manual, and you have yourself a very hard-to-find Mazda RX-8.
Note: You want the 2006+ models as the previous years had overstated hp and reliability issues. That was all fixed by 2006.
Condition:
-18,500 miles
-Clean Title
-Owned by an Adult Female Enthusiast
-Always garaged
-Never driven in the rain on purpose, never touched snow, never tracked, never abused
-Started up and driven regularly with regular oil changes regardless of miles driven
-1 wheel has very light curb rash on that you can't even see until really up close. Barely visible so not worth worrying about.
-Right rear fender has 2 tiny door dings which could probably be repaired by one of those mobile dentless repair guys. It's so small I couldn't even get a clear pic on camera
-Still has new car smell. No signs of wear on leather, steering wheel, etc... Everything works perfectly
-Spare tire has never been used
Mods:
-Mazdaspeed aluminum fender strakes ($275)
-Window Tint ($300)
-3M Clearbra to protect rear fenders from rockchips ($150)
-Otherwise 100% STOCK
Specs:
-Fully Loaded Grand Touring 6MT Model
-Keyless Entry AND Keyless Start
-Black Leather Interior
-Heated front seats
-Xenon (HID) Headlights
-Foglights
-Moonroof
-Bose Stereo System with 6 CD In-Dash Changer
-Homelink Autodimming Mirror
-OEM Aero Kit with Spoiler
-All the other stuff you'd expect like power everything, cruise control, folding rear seat, ABS, LSD, front/side airbags, etc...
-Even includes the owner's manual
Asking just $16,988 which is a killer price for this particular car. It's almost impossible to find such a low mileage, well cared for, bone stock, adult owned car in such great condition. Car is paid off, meaning title in hand, ready to be signed over to you. No trades and no lowballs please. We're really hoping to sell this to another enthusiast that will take care of it an enjoy it as much as she did.