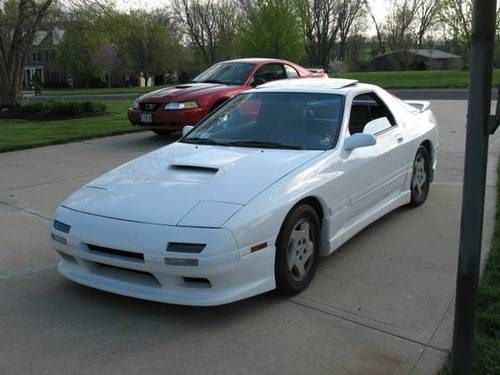 I have an 1987 Mazda RX7 GXL for sale. I have owned this car for 2 years and have had the body professionally redone since I have owned it. I will do my best to describe the vehicle in the following.

Body
-All bodywork done last year by a professional shop.
-Shine Auto Project (FRP) Full Body kit (Spec1 bumper, R-Magic Side Skirts, R-Magic rear half bumper.)
-Added an OEM Turbo 2 (aluminum) hood and Turbo 2 OEM Spoiler.
-Had all the S4 body moldings and lights replaced with the newer S5 style.
-Car was repainted Dupont's 'Snow White' (paint code and touch up paint included.) Car was originally Mazda's Nobel White, this is a much brighter and clean looking white.
-Had all seals/weatherstripping/lenses and lights replaced with new OEM parts from Mazdatrix.
-All lights work and are new.
-S4 power Aero mirrors painted to match body.
-I had the bodyshop shave the rear emblems and replaced them with original imported JDM decals.
-Body is completely rust free.

Interior
-Stock blue cloth, looks 8/10. Great for a 25 year old car.
-There is a sub box in the rear and the amp is mounted behind the passenger seat. All wiring is tucked away and hidden. There is a sony head unit installed. It is hooked up to a toggle to kill all power to it for when the car is in storage.
-Blue LED lights are mounted above where your feet are (hidden.) They turn on with the cd player.
-The has a few cracked plastics. (around the radio and the triangle behind the drivers-side mirror.)
-The steering wheel is aftermarket. I will include the original one with the car.
-The windshield wiper only works on one speed. Common problem, replacement switch will fix it.
-Interior Mazdatrix polished rear strut bar installed.
-Radio light sometimes works sometimes doesn't. I am told it needs re-soldered. As the joint weakens with age.
-A/C and heater both works. The A/C could use a recharge (isn't very cold after 25years...)
-Windows are tinted 35% to help keep the inside cool.

Engine
-1.3 N/A Rotary. Original Motor 104,000 miles and very strong with full compression.
-Unmodified engine.
-New Optima Red-Top Battery
-New Plugs, Wires and the works installed.
-New OEM Alternator (4months old)
-New front tires (2months old >100miles on them.)
-Corksport polished strutbar. installed (not shown in pictures.)
-Mazdatrix short shifter is installed. The original one will be included.
-Runs and drives very well, no hesitation or anything. Occasionally it will idle a bit high (until it fully warms up.) I used this as a daily driver until recently (new car.)
-The cold start system still is intact and works. (The cold start system revs the engine to 2-3k rpms for a while when started in neutral. Put it into gear to bypass it if you want too.)

I also will include the original Factory service manual with the car.

Feel free to shoot me any questions you may have. Upon auction end buyer will be required to place down a $1500 deposit through paypal within 48 hours. The rest may be paid in cash, certified bank check (cleared) or in full by paypal (with fees.) Shipping and/or pickup is the sole responsibility of the buyer. Thanks for looking.